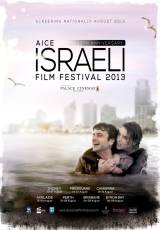 2013 marks the 10th anniversary of the Israeli Film Festival and in commemoration of its first decade, this year will see its strongest line up yet.  Social and political commentaries, love stories infused with loss and redemption, and tales of friendships both found and lost, the Australia Israel Cultural Exchange Israeli Film Festival provides the only Australian-wide opportunity to showcase Israeli films and this year it will once again highlight the breadth and strength of the Israel film industry.

Opening Tuesday August 20th and running through until Monday the 26th of August, Palace Centro Cinemas in James Street, Fortitude Valley will exclusively host the Brisbane leg of the festival where no less than 20 films will be screened for eager filmgoers who are looking to experience a unique slice of cinema you can’t experience elsewhere.

Several highlights of this year’s festival include ‘A Bottle in the Gaza Sea’,  a touching relationship drama that sensitively showcases the views of both the Palestinians and the Israelis as it follows two people caught in differing sides who long for a life free from war and strife.  Beautifully acted and realistically written, it’s a film that will speak to a younger audience as it breaks down the importance of communication in a time when everyone is looking out for themselves; ‘Inheritance’, or ‘secrets and lies’ as it should be called, is an ensemble drama focusing on a Palestinian family gathering together to celebrate a wedding amongst the climate of war.  As the war rages on and the family patriarch suffers from health issues, internal conflicts come to light, with the family now waging a battle amongst themselves mirroring the external destruction surrounding their existence; ‘Big Bad Wolves’, one of the most recent productions screening this year, is likely to be one of the films that will have everyone talking.  Reminiscent of work by The Coen Bros. it’s a dark, twisted thriller specifying the kidnapping of an accused child murderer by a renegade cop and a revenge-obsessed parent that somehow manages to inject bouts of humour into proceedings, resulting in what can only be considered a pitch-black comedy; and ‘Out in the Dark’ which details the hauntingly realistic and tender love story between an Israeli lawyer and a Palestinian graduate student.  Much like ‘Brokeback Mountain’ was more than just a “gay-themed cowboy movie”, ‘Out in the Dark’ avoids being typecast in its portrayal of a homosexual relationship as it presents this in a natural manner.  Fuelled by passionate and honest performances, this film transcends the LGBT tag to provide an engaging love story.

With an array of genres to choose from and universal themes implemented throughout, the 10th Annual AICE Israeli Film Festival promises to have something for everyone.  Shalom and enjoy the festivities.

For information on session times and ticket prices please visit the Palace Centro website (http://www.palacecinemas.com.au) or the AICE Israeli Film Festival website (http://www.aiceisraelifilmfestival.com).  ALL SESSIONS ARE OPEN TO AUDIENCES AGES 18 YEARS AND OVER UNLESS NOTED OTHERWISE.