Announcement BLUES ON BROADBEACH Lineup Music music festival by Caroline Russo | on March 13, 2019 | 0 comments | in FESTIVALS | Like it

Following their incredible first line-up announce, Blues on Broadbeach have revealed 40 more unmissable acts to perform at this year’s festival, with an unprecedented number of international artists joining the line-up in the 18th year of this much loved event.
The free festival takes place from May 16-19, 2019 in Broadbeach, the idyllic beachside entertainment hub on the Gold Coast. With over 170,000 people attending last year and an economic boost of $21 million into the economy, this year is set to exceed all expectations.

The festival is jam-packed with a line-up giving music lovers food for the soul, combining the best of blues with the cream of Gold Coast cuisine in a guaranteed recipe for success.

This sophisticated music event is held over four days across 20 different indoor and outdoor stages in stunning Broadbeach locations, allowing you to enjoy some of the best Blues music from around the world while dining in top restaurants or relaxing in some of Broadbeach’s scenic streets, bars and parks. Check out the festival sizzle reel here.

While the rest of Australia is snoozing through winter…Blues on Broadbeachfans will be grooving on the sunny Gold Coast and escaping the winter blues. The full line-up is as follows… with the exception of The Gipsy Kings at The Star, it’s all completely FREE! 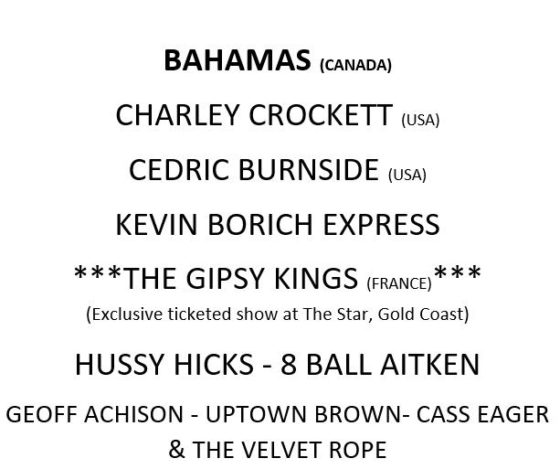 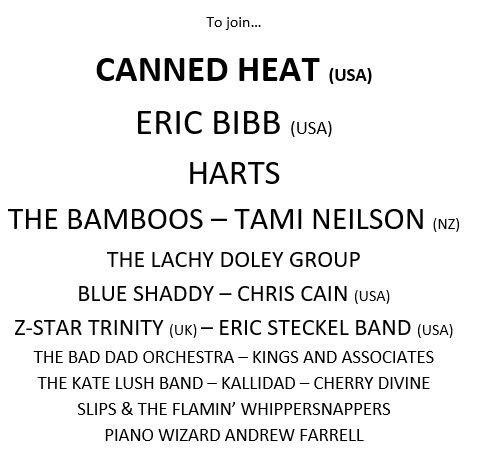 “I think what is so special about this year’s event is the number of international artists performing at the festival,” said Festival Director Mark Duckworth. “In 2019 we have artists from France, Canada UK, NZ, USA, and of course an explosion of home-grown talent spreading the message of Blues on Broadbeach around the globe”
This second line-up features incredible Canadian musician BAHAMAS who has opened for well-known musicians like The Lumineers, Jack Johnson, and Robert Plant and has four successful albums under his belt. Bahamas has managed to balance his busy music recording and touring with raising a family, to win top achievements including ‘Adult Alternative Album of the Year’ and ‘Songwriter of the Year’ at the Juno Awards of 2015. Head to Blues on Broadbeach to see this unique talent in action.

This diverse line-up also boasts talented Texan musician CHARLEY CROCKETT who has been described as being “rich with southern flavour” for his unique music that combines Delta blues, honky-tonk, gospel and Cajun Jazz. Having won ‘Best Blues Act’ at the Dallas Observer Music Awards in 2015 and being compared to legendary musicians like Bill Withers, Merle Haggard, and Gary Clark Jr., his music performance is one you won’t want to miss.

Another top artist from the US who will be gracing our stages is Grammy nominated artist CEDRIC BURNSIDE whose latest album showcases the rich tradition of Hill country blues dragged kicking and screaming into the modern-day with crackling electricity. Recipient of the Blues Music Awards honour as ‘Drummer of the Year’ for four consecutive years, Burnside utilizes his emotional music to express a will to survive through hard times and coming out better because of it.

Joining these incredible international acts is local Queenslander KEVIN BORICH EXPRESS who has 40 years professional experience, having opened for AC/DC and shared the stage with well-known artists like Bo Didley, Richie Blackmore (Deep Purple), and Ron Wood (Rolling Stones). Kevin has topped the Australian Rock Music Awards twice as ‘Best Guitarist’ and has a rich mix of fans ranging from young blues fans to old rockers who all love to see how he transcends his rock-based funk ‘n’ blues boundaries into the realms of their world.

“I’ve played at Blues on Broadbeach pretty much every year and always have an enjoyable time playing in such a beautiful location to loyal fans,” said Borich. “I call it the -Cafe Au Lait Festival – pronounced – ‘The Lar- Tay Festival’ – No Mud – no discomfort – everything you’d need within reach – Festival!”

In addition to the free Blues on Broadbeach festival, there will also be an exclusive ticketed show at The Star Gold Coast where salsa-pop-flamenco superstars, The Gipsy Kings, will perform on May 18. Hailing from the south of France, the group have sold close to 20 million albums and toured the world. The Gipsy Kings are known for their energetic sets featuring infectious Latin rhythms and virtuoso guitar playing, and their music has been described as ‘a crossroads where gypsy rhapsody and flamenco meets salsa funk’. They are fronted by the incredible Andre Reyes who delights audiences with his impressive guitar playing and remarkable vocals. You can buy tickets to this exclusive show here.

Blues on Broadbeach combines the ideal holiday destination with blues tunes from top artists from around the world.

The Queensland Government, via Tourism and Events Queensland, is proud to support the Blues on Broadbeach Music Festival which features on the It’s Live! in Queensland events calendar. Your perfect next event is in Queensland where live events combine with the most incredible destinations, and life is beautiful one day, perfect the next.