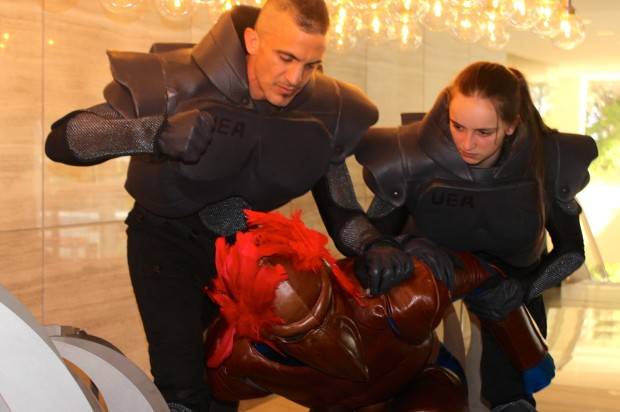 3010 Our fight has just begun.
A Sci Fi series featuring the work of writer Michael Rodrigues and producer Sarah Disney will take 3010 viewers on an epic adventure, exploring themes of hope, freedom and equality as the main characters endure daily struggles in this unusual and complex world. From the alien controlled mega-cities to the humans living in the ruined wasteland, you will be captivated by the powerful relationships and phenomenal action sequences as you are transported into a world full of danger and heart-stopping excitement. This is what is to be presented at the GC Indie Film TV Network Events on June 23rd at Jupiters Hotel & Casino in the Old Poker Room commencing at 7.30pm.

Michael Rodrigues is an actor and martial artist, who has been appearing on Australian screens over the last few years. Among his credits are television shows City Homicide, Rush, Sea Patrol, Offspring and most recently Secrets & Lies. His extensive experience in martial arts and further training in action performance have added to his screen accomplishments. In 2006 Michael came up with the concept for 3010 and has spent the last few years cultivating and sharing the project with other creative minds in order to bring this rich world to life. Under the tutorship of writer, Shane Krause, Michael and director, Simon Smith have written the short film script for 3010: The Righteous Path, which will be used to pitch the concept of this Australian-made science fiction television series. With the belief that this endeavour will change the face of the Australian film industry, Michael is dedicated to making 3010 a reality.

On the night actor John Batchelor will be flown in to present the project, as well as other guest actor Radek Jonak who is attached to this project and both *would* love to see this come to life! The GC Indie Film TV network event evening will be raising the awareness and give support to the project and where we can look at getting behind the project to get *it* pitched for filming (for) a (web) TV series to all our special guests on the night and film industry workers.
For anyone that *would* like to know more on the project before hand email here [email protected] Tickets for the event are $20.00 which can be purchased at the door on the night. Dress code is dress to impress.
Dinner prior to the event will be at VIVO restaurant, and for anyone that is keen to book in for a set menu $33.00 3 course meal and drink, mention the GOLD COAST INDIE FILM FESTIVAL.