SIMON BAKER TO GET TRAILBLAZER AWARD AT ACCTA 2017 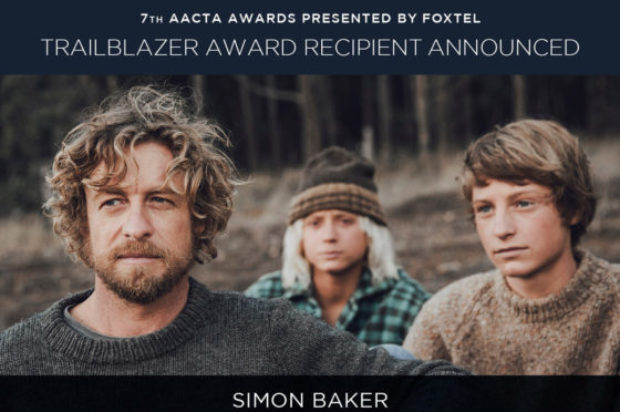 Australian actor and director Simon Baker was today announced as this year’s recipient of the AACTA Trailblazer Award.

The Award will be presented to Simon at the 7th AACTA Awards Ceremony presented by Foxtel on Wednesday 6 December at The Star Event Centre in Sydney, telecast at 8:30pm on Channel 7. Limited tickets are still available, so buy yours today before they sell out!

Previously awarded to Rose Byrne and Isla Fisher, the Trailblazer Award recognises an Australian screen practitioner who serves as an inspiration to others, acknowledging their valuable contribution to promoting Australian screen culture and excellence at home and abroad.

“Simon Baker’s stellar reputation with audiences and industry worldwide has made him an incredible ambassador for the Australian screen industry and the outstanding screen talent it produces,” said AFI | AACTA CEO Damian Trewhella. “From his success on US television to his return to Australia for his feature film directorial debut, Simon’s career trajectory stands as an inspiration to future generations in the industry.”

Throughout his career, Simon Baker has consistently showcased his diversity as a screen practitioner; masterfully transitioning from actor to director across film and television.

First garnering international attention when he starred in the Oscar®-winning film L.A. CONFIDENTIAL, Simon has developed a varied oeuvre throughout his career. His notable films include Michael Winterbottom’s thriller noir THE KILLER INSIDE ME; Ang Lee’s critically acclaimed RIDE WITH THE DEVIL; lauded box office success THE DEVIL WEARS PRADA, opposite Meryl Streep and Anne Hathaway; and the Oscar®-nominated and multiple independent award-winning feature MARGIN CALL.

From 2001-2004, Simon starred in the TV series THE GUARDIAN, for which he received a Golden Globe nomination for Best Actor in a Drama Series. In 2008, he began his role as the lead in the critically successful international hit THE MENTALIST, where he was nominated for a Primetime Emmy Award, a Golden Globe, a Screen Actors Guild Award and two People’s Choice Awards.

Simon makes his feature film directorial debut with BREATH, an adaptation of Tim Winton’s bestselling novel, which he also co-wrote and produced. Simon stars in the West Australian-shot drama alongside Elizabeth Debicki and Richard Roxburgh.