coaching Mark trevorrow SLOCOACH Tim Ferguson by Caroline Russo | on March 16, 2021 | 0 comments | in Entertainment | Like it Calling all Creatives: SLOCOACH Arts Launches in Australia, Offering COVID-Safe Digital Coaching with the Best in the Business

Mark Trevorrow (Bob Downe), Brendon Stimson (The Prom), Tim Ferguson (DAAS), Max Sharam and many others on board

ATTENTION all budding performers, SLOCOACH, the innovative platform revolutionising the world of online coaching, has just launched an Arts & Entertainment arm to their Australian site.

SLOCOACH Arts gives up-and-coming artists, comedians, singers, musicians, dancers and many other creatives the chance to digitally connect with the best in the business to receive personalised, one on one coaching.
The platform has attracted a roster of top Australian artistic talent, including comedy genius Mark Trevorrow, who is best-known for his iconic character, Bob Downe. Other names involved include Tim Ferguson, member of wildly popular, stunningly anarchic trio the Doug Anthony All Stars, top US choreographer Brendon Stimson (who worked with Nicole Kidman and Meryl Streep on Netflix’s The Prom), and ARIA-award winning hitmaker and international femme fatale of comedy and cabaret, Max Sharam.

With SLOCOACH Arts, students can choose their specialist coach from a wide range of artistic fields including musical theatre, dance, singing, comedy, classical music, amongst many others. Once they have selected their coach, students upload a video of themselves performing and will receive detailed analysis and personalised feedback from their coach, providing tips on how they can elevate their performance. Even better, students of all levels and abilities can interact with coaches from wherever they are in the world, thanks to SLOCOACH’s cutting-edge technology.
The platform will prove invaluable to artists around the world in 2021, as SLOCOACH Arts is completely COVID-safe and enables students and coaches to keep doing what they love, despite lockdowns and restrictions. COVID has introduced many millions of people around the world to online working and learning, and this will continue to develop and evolve as we slowly enter the new, post-COVID digital world. 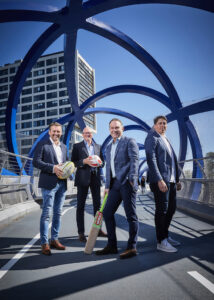 Co-Founder of SLOCOACH Luke Jecks says of the new addition to the platform: “SLOCOACH is all about helping people to thrive at doing what they love, which is why we’re so excited to be adding SLOCOACH Arts to the platform. SLOCOACH has already seen great success in Australia with its digital sports coaching platform but now it’s time for the creatives to get involved and get a piece of the action too,” he said.
“Not only is the SLOCOACH Arts platform a fantastic tool for budding creatives, as they’ll have access to some of best talent in the business, but it’s also a brilliant opportunity for our coaches from across the world, to interact with their fans.”
SLOCOACH is best known for its sports coaching platform which launched in 2020 in Australia, featuring some of Australia’s best sporting talent, including Olympian Sally Pearson, Wallabies captain Michael Hooper, cricket legend Michael Slater, WNBA Champion Lauren Jackson, tennis star Casey Dellacqua, and AFL great Dane Swan.

SLOCOACH Arts has already proved a great success in the UK, where it first launched in 2020, featuring coaches in the theatre and dance sector. Since its launch, Broadway royalty Rob McClure and West End favourites Rosalie Craig and Hadley Fraser, have been using the UK platform to coach students of all ages and abilities around the world, and will also now be on hand to coach Aussies looking to brush up their skills too.
With the arts industry being hard hit as a result of COVID-19, SLOCOACH Arts hopes to revitalise the struggling sector by allowing Australian artistic talent to become self-employed coaches, at a time when they’ve been faced with a reduced workload and performance cancellation.

“Many of our coaches have personally felt the impact of COVID-19 on their livelihoods and are now turning to SLOCOACH Arts to be able to share their expertise with the world during this strange time, using their down-time to help mould aspiring creatives,” said Luke Jecks.