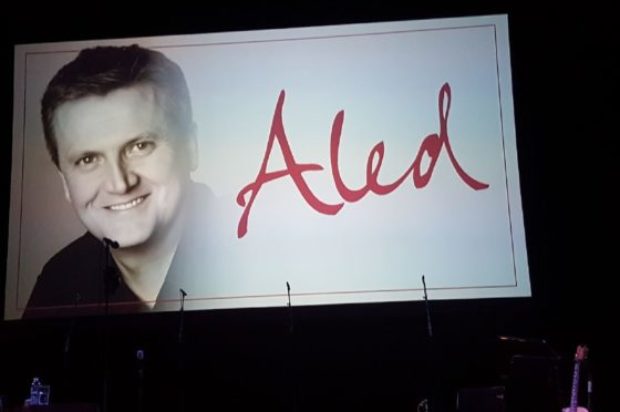 One Voice – Live in Concert tour.

Aled Jones held his final concert while touring Australia at the Queensland Performing Arts Centre, on Friday night. It was indeed a lovely evening that was accompanied alongside Matt Withers on guitar, with musical director Ian Tilley on piano. What really stood out was the pleasure they showed in sharing this concert event together. They gave such respect to one another that it shone through out the evening’s performance.

Aled shared with the full house, an evening that was intimate and warm, and who generously recited a number of anecdotes from throughout his career. There were classic renditions of songs such as Danny Boy, Amazing Grace, Feels Like Home and some Welsh favorites including “All Through the Night” where the fans were humming quietly at times to their favourite tunes.

Special guests that were selected by Aled to accompanying him on stage open open the evening were the Sheldon College Choir who sang beautifully. Their performance included “Kissing You” from Baz Luhrmann’s Romeo + Juliet as well as “City of Stars” from La La Land.

For fans of his earlier work, the concert also paid homage to his earlier career in a number of duets. These duets were backed with recordings of Aled singing when he was younger. As well, there was a rendition of As Time Goes By, with a recorded backing sung by Dame Vera Lynn.

Aled Jones performs with soul and a genuine regard for his audience that comes right from the heart. Those who missed out will be glad to hear Aled plans to return and tour throughout Australia next year as well.