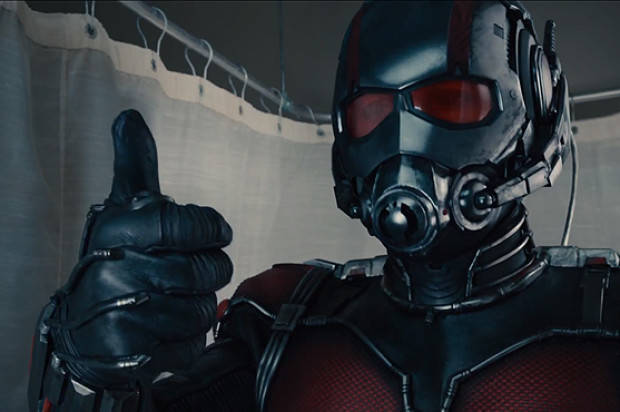 Whilst many were particularly underwhelmed by Marvel’s last cinematic entry, ‘Avengers: Age of Ultron’ (personally, I wasn’t but I understand the reaction), the choice to scale back for ‘Ant-Man’ has worked in their favour as it breezes by on a lighter tone, forgoing the slight heavy-handedness that was evident in the aforementioned ‘Avengers’, and finding itself more in-tune with Marvel’s last surprise breakout ‘Guardians of the Galaxy’.

It’s safe to say that the lead-up to ‘Ant-Man’ hasn’t nearly been as grand as fellow MCU entrants with the trailer highlighting the more comedic tone of the film, while the eleventh hour hiring of unproven action director Peyton Reed (‘Bring It On’, ‘The Break-Up’) following the controversial exit of original helmer Edgar Wright did little to ease anxious viewers. Much like the left-field choice of James Gunn (screenplay writer of such cinematic masterpieces as ‘Scooby-Doo’ and its sequel ‘Monsters Unleashed’) for ‘Guardians…’, the unlikely Reed proves a winning choice as his background in comedy allows him to fully embrace the heightened lunacy that is ‘Ant-Man’.

Adopting a heist film mentality in the same vein the Captain America sequel ‘The Winter Soldier’ was an espionage thriller at its core, ‘Ant-Man’ gives us one of the Marvel catalogue’s most likeable heroes in Scott Lang (Paul Rudd), a former cat-burglar turned 9-5-wannabe-worker who so desperately wants to live an honest existence in the hopes it will earn him visitations with his young daughter. Sought out by scientist Dr. Hank Pym (Michael Douglas), on account of his unmatched breaking and entering skills, Scott is given a chance at redemption when he is instructed to infiltrate Pym’s old company and destroy the prototype of an enhanced suit that has the ability to shrink its wearer down to the size of an ant whilst simultaneously increasing their strength and agility. In order to achieve this, Scott must adopt Hank’s old identity – that would be Ant-Man – and learn to function in his own super-suit that contains the same features as the one they wish to destroy.

Even by comic-book standards ‘Ant-Man’ is quite ridiculous but thankfully Reed is aware that there was no other way to play this film than with a rich sense of humour, and though the outcome may not be as lavish or as action-heavy as former Marvel productions, it’s by far one of the most creative. Working with a smaller ensemble also proves beneficial as it allows each character to draw their own individual focus with Rudd’s titular hero emerging victorious; the actor’s relatable every-man personality shining through and, wisely, his unique sense of humour never feels like a carbon copy of the other MCU wise-cracker, Tony Stark (as played by Robert Downey, Jr). Corey Stoll is appropriately over-the-top as Pym’s nemesis, and eventual villainous antagonist to Ant-Man, Evangeline Lilly (rocking a stellar pageboy hairstyle) holds her own as the sole female, playing off unwanted flirtation with Rudd just as easily as dramatic spats with on-screen dad Douglas, whilst Michael Pena unexpectedly walks away as the cast highlight playing an eager yet dimwitted former cellmate of Scott’s who just wants to somehow be involved; the sequences involving his character recounting his various extended anecdotal explanations is a real treat.

Despite the mention earlier that ‘Ant-Man’ isn’t as lavish or as action-heavy as what we’ve come to expect from Marvel Studios, that is in no way suggesting this film isn’t without its exciting set-pieces; it’s just that Reed wants to take his time and not over-saturate his picture with continuous spectacle. The first moment Scott puts on the Ant-Man suit is a beautifully realised sequence as the crisp colours on-screen enhance the 3D technology (it should be said this is one film worth seeing in the 3D format) and witnessing the simplest trickle of bathwater transform into a tidal wave for the now-miniscule Scott is a far-more interesting hook than you would think. Similarly, the infamous ‘Thomas the Tank Engine’ scene that so wonderfully closes out the theatrical trailer works perfectly within the context of the film, and you’d be hard pressed to not find this particular action sequence a serious thrill; it also happens to receive the finest of pay-offs worthy of audience applause.

Though we will never know if Edgar Wright’s take on ‘Ant-Man’ would be any better or worse than what we have now, Peyton Reed has more than stepped up to the plate and handed us an unlikely victor. With a far more jovial spirit, and a family-friendly temperament, ‘Ant-Man’ may not seem like he’s worthy enough to play with the bigger guns of Marvel but this immensely entertaining film proves that size really isn’t a factor. As the (now obligatory) post-credits stinger inform us, “Ant-Man will return” and I, for one, can’t wait to see where the little guy travels to next.