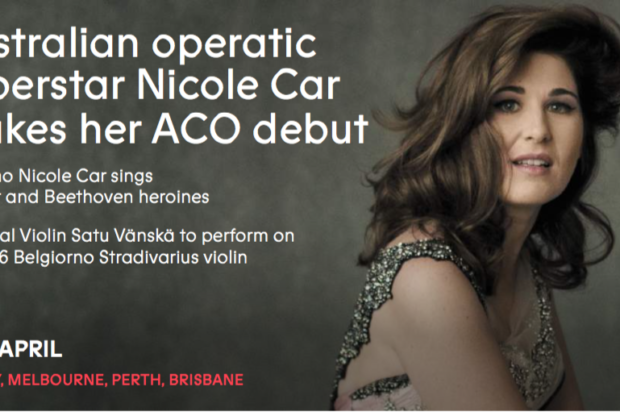 Nicole Car was 17 years old when she saw her first opera, Tosca, at Melbourne’s State Theatre. Fast-forward 14 years and the Australian soprano has become one of the fastest rising stars in the international opera world, having sung critically acclaimed performances with Covent Garden’s Royal Opera House, Opéra national de Paris and Opera Australia that have drawn comparisons with the great Dame Joan Sutherland.

Car will make her debut with the Australian Chamber Orchestra in April, in her only Australian orchestral appearance in 2018. She and the ACO will perform a program that that celebrates Mozart, Beethoven and Verdi’s operatic heroines, including a selection of Beethoven and Mozart’s spectacular, but rarely performed, concert arias.

“Mozart and Beethoven understood the human voice very, very well,” said Car. “I feel like in their stand-alone concert arias – because they knew that the singer wouldn’t have to sing an entire three-hour opera – they were composing to stretch the voice just as much as they could. So I’m really looking forward to the challenge involved in singing these concert arias, as well as getting into these strong female characters.”

Car grew up in the Melbourne suburb of Essenden and studied jazz singing as a teenager. However upon seeing the late Deborah Riedel performing the lead role in Puccini’s Tosca, the 17-year old Car was hooked. She immediately found herself a classical vocal teacher and three months later, after ignoring her parents’ pleas to study law, was enrolled in classical voice at the University of Melbourne.

Car has gone on to achieve the kind of success that many aspiring young opera singers only dream of. Upon completing her Bachelor of Music, Car won the 2007 Herald-Sun Aria, the 2012 ASC Opera Awards and the 2013 International Neue Stimmen competition in Germany. Her solo album of operatic arias, The Kiss, debuted at No. 1 on the Australian classical charts and in 2015 she made her debut at the Royal Opera House, Covent Garden, singing Tatyana in Eugene Onegin and Micaëla in Carmen.

The ACO’s Nicole Car concerts will be the first opportunity for Australian audiences to hear the latest addition to the ACO’s exceptional collection of string instruments: the 1726 Belgiorno Stradivarius.

The custodian of this magnificent instrument, ACO Principal Violin Satu Vänskä, will perform as soloist for Beethoven’s Romance for Violin and Orchestra in F major.

BEETHOVEN Romance for Violin and Orchestra in F major

MOZART Symphony No.27 in G major