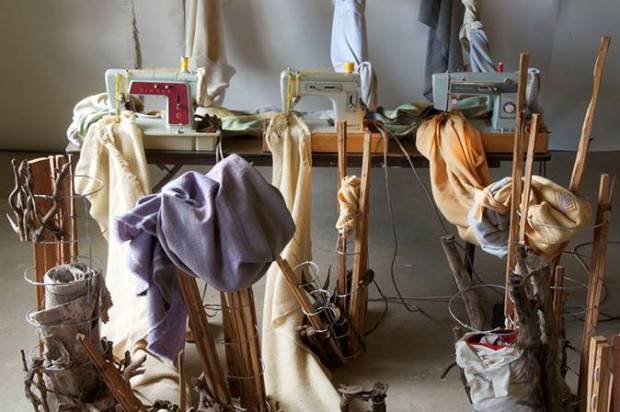 Above image: Never-ending by Alison Clouston and Joan Clouston, 2015, in Daughters Mothers at Sydney College of the Arts for International Women’s Day. Image courtesy of the artists.

A moving archive of contemporary art, film and social history projects that reflect on past experiences of Australian women opens at Sydney College of the Arts (SCA) on 5 March to commemorate the 40th anniversary of International Women’s Day.

From the tales of women institutionalised in Sydney in past centuries, the pioneering Australian filmmakers of the 1970s, to a 2005 time capsule of 100 Sydney artists’ interviews and, more recently, the creatively-motivated relationships of four daughters and mothers – the stories and works are as intriguing as they are diverse.

Future Feminist Archive is an exhibition and research initiative led by the University of Sydney’s contemporary art school. It comprises four projects inspired by different archives that amplify the experiences of Australian women from contrasting times and backgrounds.

Heading the research is SCA’s Associate Dean, Dr Jacqueline Millner. She said: “In recent years we have seen a groundswell of interest in feminism’s role in contemporary art and culture.
“One significant landmark is this year’s 40th anniversary of International Women’s Day, which is also the 20th anniversary of The National Women’s Art Exhibition held in over 150 venues across Australia and organised by the late feminist art historian Joan Kerr.

“Future Feminist Archive will mark the anniversaries by hosting a series of exhibitions and events that look at how the past is always with us. Archives can be understood as official records but they also present an opportunity to interpret the past differently. This inspires many artists, who go searching for what history has overlooked to bring us new stories and perspectives,” said Dr Jacqueline Millner.

The exhibition includes a film produced by the Parramatta Female Factory Precinct Memory Project that shares the revelations of former residents of three historic Sydney institutions:- the Parramatta Female Factory (1821-1847); the Roman Catholic Orphan School (1844-1886); and the Parramatta Girls Home (1887-1974). Launched in 2013, the project is run by a voluntary group, Parragirls, headed by Bonney Djuric. It aims to create a historical record of the places, experiences and impact on the lives of the women who lived in these institutions.

Daughters Mothers, a centrepiece of the exhibition, brings to light the creative connections of four mid-career artists and their mothers. Judy and Joyce Watson, Sue and Peggy Pedley, Alison and Joan Clouston, and Toni Warburton and the late Enid (Soot) Warburton, all weave their family stories together with broader cultural history, and reflect on the inter-generational passing of knowledge.

Twenty-four hours of video of 100 Sydney artists interviewed by Anne Kay and Jane Polkinghorne in 2005 features in Artist Archive. The interviews capture the thoughts of each artist on what it means to be an artist, and the social and political issues that shaped their art. Ten years on, Artist Archive is a fascinating time capsule of Australian contemporary art and culture. The exhibition will include the reflections of some artists looking back on their earlier selves.

The exhibition also screens several ground-breaking films by Australian feminist filmmakers The films, which were made during the second wave of feminism in the ‘70s, have helped shape contemporary experimental film in Australia. They include rarely-seen works such as Maidens (1978) screened in Cannes in ‘78, We Aim to Please (1976), My Survival as an Aboriginal (1978), Size 10 (1978) and For love or Money (1983). Women’s Gaze and the Feminist Film Archive is curated by Margot Nash, Jeni Thornley and Loma Bridge, and coordinated by Sarah Attfield.

Future Feminist Archive will be launched with a talk by prominent Australian artist and SCA’s artist-in-residence Tracey Moffatt who will be discussing her recent work on 4 March (6pm).

Artists and filmmakers in the Feminist Film Archive will speak at a symposium on 6 March (10am-3.30pm) at the Art Gallery of NSW. The artists in Daughters Mothers will talk about their work at SCA Galleries on 7 March (11am-1pm).