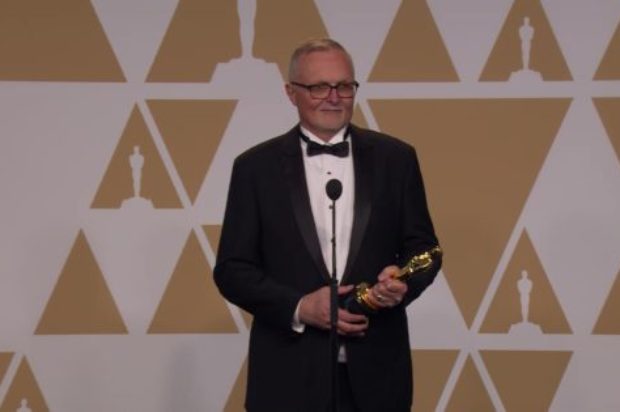 BACK STAGE WITH PRESS LEE SMITH ON HIS WIN FOR DUNKIRK

Q. I’d love to know, do you credit learning your skills in the Australian film industry for getting this little gold statue today in any way?
A. Yes. I’d have to totally credit that. You know, all of my formative years were in the Australian film industry and working with the greats like Peter Weir and Phil Noyce and Jane Campion, and many other great directors. Obviously George Miller. So, yeah, I mean, to get here is the sum of all those parts. And then of course falling in with Christopher Nolan who is a complete and utter genius. And why he works with me, I’ve got no idea, but it’s awesome.

Q. How do you plan to celebrate?
A. I’ve got a couple of parties to go to. And apparently this gets me into one. So yeah, I’m gonna ‑‑ I mean, this has been very tense up until this particular moment, so I feel so much better.

Q. This is your seventh film, I believe, with Chris Nolan. What has made that collaboration successful and also the collaboration with his long‑time sound team, which also won tonight?
A. I think if you have similar tastes to the people you work with, you tend to work with them on many, many films. And I’m pleased that when I first started working with Chris, we were always looking at things in a similar light. And some people say a combative relationship does wonders for films. But in my experience, it’s the complete reverse, is that if you’re looking at things and you’re liking them and you’re hearing music and you’re feeling the same emotion, then you’re in sync with each other. So that rolls over into many, many films of collaboration. And of course there because a shorthand working with people who you’ve worked with and the teams you’ve worked with.

Q. I’d love to know, was there a similarity in your approach to juxtaposing the different timelines, things happening over different space and time in this film with juxtaposing the different dream worlds in INCEPTION? It seems like there was a similarity in approach there.
A. Was there? The only similarity I think is just trying to make sense of the very complicated story you’re trying to tell. And I think my job as an editor is to do your best to keep the audience with you and, you know, let them stay with you over the course of any given movie and entertain them. I mean, it’s got to be entertaining and these ‑‑ you’ve just picked on two very, very complicated movies. The similarities are: Chris does love to play with multiple timelines, and dream within a dream within a dream. And I might be in a dream now. I’m not sure. I feel like I’m in a dream. But yeah, it’s ‑‑ I think the editor’s job is to just simply keep the audience entertained, keep them understanding the plot, keeping it moving forward, and then hopefully you come out of it with a commercial success. And all of Chris’s films had been, and no small amount of credit goes to him.

Q. Can you talk a little bit about the emotional ‑‑ the climactic sequence with the little ships and ensuring maximum emotional impact at that moment?
A. Well, that was a very interesting scene. It was one of the few scenes that we slid in a timeline as we were editing and testing the film, because we were setting up this continuous suspense, you know, breathlessness to the film. And what I was always worried about was someone would actually pass out watching the movie. So we had this emotional cannon to fire, and we had to find exactly the right moment to fire that cannon. And we tried it earlier, later in the timeline, and it took many, many versions of the film until we actually hit what affected, I guess, Chris and I the most from an emotional standpoint, and that’s where it sits in the film now.

Q. I was wondering if you could talk about, perhaps, if this is a challenge or not, with the decision to not show the enemy forces throughout the film?
A. I think that was a decision made very early on from Chris where, if you wanted to experience this war, you wouldn’t want to have the ability to jump to the enemy’s viewpoint, which is this sort of ‑‑ you know, in most war films, you would jump to the German position and read some subtitles, or jump to the Germans who are sniping on the boat and see them taking aim and try and get into their head space. I think what Chris was really trying for is the ability to just stay with the characters that we were on, so you’re never jumping forward or backwards. And we did a similar thing in MASTER AND COMMANDER, so I was used to that as an idea where we were staying, in that film in the English boat versus the French boat. It’s a constricting way of making a film, but I think it’s a very real way of making a film. And I think it worked out really well, and I think it was the right decision. I mean, in the end you see a couple of German helmets, and that is the entire enemy force from our point of view of the audience.

Q. The sound of this movie, it’s very much a part of the momentum. I want to know how much the music, the score played into that. Hans Zimmer said this is the toughest thing he ever has done. And I wondered: Is it music? Is it sound effects? And how much did that influence how you created the momentum?
A. Well, the momentum in the film was designed by Chris right from the get‑go. When I first arrived in Dunkirk when we started shooting, he put a pair of headphones on me and played me the sound of a watch ticking, but with a very interesting cadence. And that cadence is ‑‑ it’s something that just always sounds like it’s ascending, and it’s always ‑‑ makes ‑‑ so it’s making your heart beat faster and faster. And no matter where you cut you’ve made this ascension forever. And that’s what we did with the music. So no matter where you drop into the track, if you just drop in and listen, it sounds like it’s ascending. It’s an audio illusion. It was very, very complicated, and one of the reasons that Alex Gibson was put on the ticket with the sound effects supervisor Richard King. Because the complexity of what that was, was you could never put a cut in the music. So once we laid the music in, whenever I changed the picture, we had to move the edit points on the music in a very unconventional fashion.

And now I’m talking on and on, but it’s so complicated I’m surprised Hans could even stand up and talk about it, because it really was a mathematical and technical marvel. And it has a lot to do with why your heart races in the movie from the get‑go because it’s ascension, it’s continually sounding like it’s getting worse. And then we briefly pause it when we’re on the beach and then we re‑instigate it again. Yeah, it is one of the most unique scores I think in history.

Q. And it worked, wow.
A. Yeah. I thought it worked. And it was amazing, it was an amazing challenge to work on. But, you know, good things come of hard work, so…