International Art Exhibition La Biennale di Venezia. by Caroline Russo | on May 12, 2019 | 0 comments | in arts | Like it 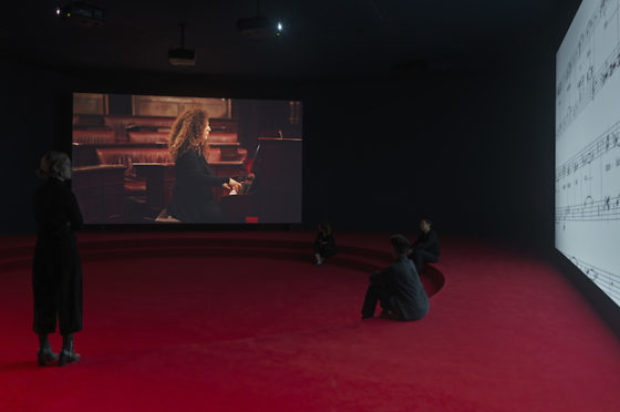 Angelica Mesiti’s ASSEMBLY is a new three-channel video installed within an architectural setting inspired by the historical shape of the community circle and amphitheatre. ASSEMBLY establishes as an evolving set of translations from the written word to stenographic codes then music, and performance. Filmed in the Senate chambers of Italy and Australia, the three screens of ASSEMBLY travel through the corridors, meeting rooms and parliaments of government while performers, representing the multitude of ancestries that constitute cosmopolitan Australia, gather, disassemble and re-unite, demonstrating the strength and creativity of a plural community.

Angelica Mesiti is the 39th artist to present work for Australia at the La Biennale di Venezia, which is widely considered one of the most important and prestigious events on the international arts calendar.

Based between Sydney and Paris, Angelica worked with more than 40 Australian arts professionals to realise the work. “Collaboration is an important part of my practice, and a central element in the work itself. ASSEMBLY draws on a need to come together, to exchange and to learn from each other. So I thank and acknowledge the dancers, singers, musicians, film and sound practitioners, the designers, architect, installation and project team who helped me bring this work to fruition,” she said.

“Angelica Mesiti has created an important new work that depicts the many faces of modern Australia, the fragility of the human condition, and our need in difficult times, to come together to share, celebrate and gain strength. We expect ASSEMBLY will resonate for international and Australian audiences alike.”

Artist Angelica Mesiti said, “Translation has been a particular enquiry and methodology for me for a number of years. In ASSEMBLY, I explore the space where communication moves from verbal and written forms to non-verbal, gestural and musical forms. The latter creates a sort of code upon which meaning, memory and imagination can be overlaid.”

Curator Juliana Engberg said, “ASSEMBLY uses and personifies the exilic energies of those who seek belonging in the community—the young, the female, Indigenous, the newly arrived and exiled, the refugee as well as the artist. Mesiti’s performers play along to an inherited code, but through translation, improvisation, adaptation, and re-interpretation demonstrate how a new music can emerge. The abstract relations and associations within ASSEMBLY open a space of imagined possibilities arising out of strange juxtapositions and unlikely re-locations.

“Cutting a rupture into the voided place of government to ignite a next succession of communication, ASSEMBLY seeks to create a new space for those who want to speak differently, hear attentively, and act together to form a new translation of the democratic process.”