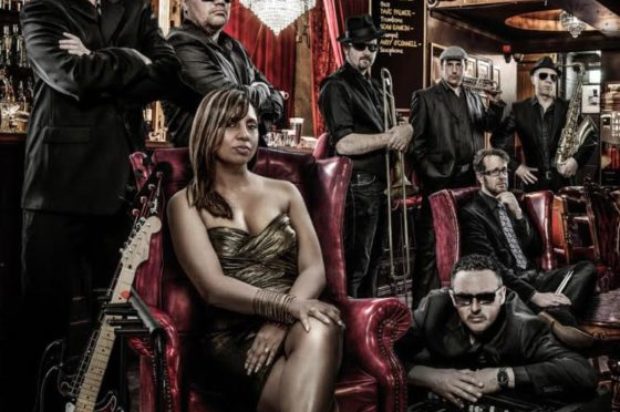 Andrea Marr’s first full length soul album Natural is a joyous celebration of the music she has always loved – harking back to the glorious sounds of Stax and Motown-era soul, delivered with her own distinctive voice and style.

Andrea’s deep love of music and the strength and joy it brings her has always helped sustain her and her loved ones – through the hard times of struggling to make ends meet, political unrest, the personal upheaval that comes with moving countries and the loss of your parents in consecutive years.

Born in Colombo, Sri-Lanka, Andrea and her parents and two older brothers lived in a poor neighbourhood where music was the glue that held her family together. As a young child, Andrea remembers sitting on the front steps of the flats where they lived on weekends, with her dad playing guitar and her family singing harmonies to everyone in the neighbourhood. The neighbours, who were just as poor, appreciated the entertainment.

Natural, Andrea’s 7th release, is an album that gives you the very best of her expressive vocals and passionate, heartfelt songwriting, with nine originals appearing on the album. From the high energy opening powerhouse ‘Force Of Nature’ a song written about relationships that hit you like a hurricane, to the gospel R&B ‘Grateful’ which recalls a life-threatening cancer scare Andrea had a few years ago, and is one of Andrea’s best received originals – sung in churches all over Melbourne and covered by several young fans to the Marva Whitney classic ‘What Do I Have To Do’ featuring Andrea’s monster horn section (featuring a searing trumpet solo from Sean Rankin) is a reinvention of the original while still being very respectful of it. It’s an album that is a celebration of the style of music that has enriched and nurtured this talented artist since her childhood in Colombo.

Natural features Andrea’s 8 piece soul band The Funky Hitmen – who released the well-received EP Sass and Brass in 2013. This is the full album of what was started back then – and although some of the players have moved on, the sound remains the same – soulful, dynamic and uplifting.

Hit below to check out Andrea and the band tear into the Aretha Franklin classic ‘Rock Steady’ – the 2nd track on the album.
Andrea and her big band will be launching the album on Tuesday 31st October from 8pm at the Flemington Bowls Club (free entry), followed by a headline performance at the Wangaratta Festival of Jazz & Blues on Saturday November 4, from 10.30pm at the Merriwa Park Blues Marquee. Natural is out October 1 via Only Blues Music.