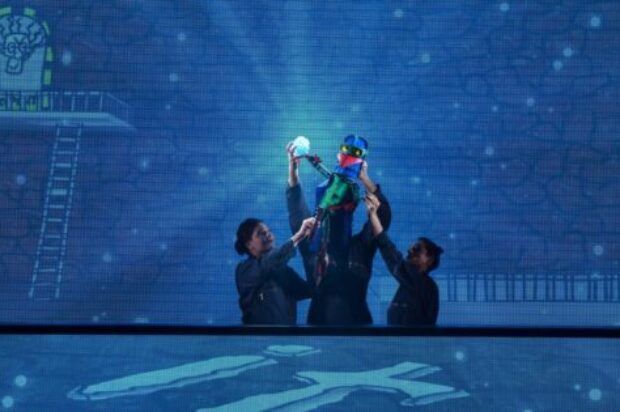 For us, the creation of visual theatre usually starts with the development of a script. We like to make use of a solid narrative in all of our work. Too many times we’ve seen a production that is utterly gorgeous to look at, but we walked away saying “…but what was it about?”.

Starting with words helps us to ensure that we have a solid base, but unlike more traditional theatre forms, these word are far from gospel.
2. MUSIC CAN MAKE OR BREAK THE STORYTELLING

Music plays a vital role! For DPS, visual theatre includes the aural elements. We usually commission an original score by a composer, at the very early script drafting stages, to ensure the music has equal storytelling weight. We also work closely with our Sound Designer to make sure the sound composed will pull the audience further into the show, and help to build the world beyond what you see on stage!
Production photo from Laser Beak Man, by Dead Puppet Society in 2017. 6 cast members on stage with puppets.
Laser Beak Man, 2017 (La Boite Theatre & DPS). Dylan Evans Photography.
3. MULTIPLE ART-FORMS ARE INTEGRATED

Our approach to visual theatre is centred on seamlessly integrating a wider variety of theatrical form, such as projection, music and lighting, combined with cutting edge technology, to create something truly innovative.

In our work, we don’t privilege one form over the other in terms of its potential, and lean into the strengths of each to make the stories we tell as impactful as possible. It’s sort of a case of the sum ending up greater than the total of its parts.
4. MOVIN’ AND GROOVIN’ IS ESSENTAIL

Like music, movement is a core element in our form of storytelling. Whether it be the choreography of puppets, movement sequences, or the way that an actor navigates space, focusing on the quality of movement helps not only to tell the story but also build the imaginative world of the work.
Nick Paine from Dead Puppet Society in the workshop
Pictured: Nicholas Pain, DPS’ Executive Producer. 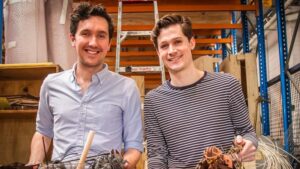 Visual theatre is incredibly time intensive! We usually do 3-4 creative development periods to develop the visual forms and technology used in our work. That’s just to get the forms unpacked and the systems working before we even start our 4-week rehearsal period and tech week in the lead up to the premiere!
6. IT’S EITHER INCREDIBLY CHEAP, OR EXTREMELY EXPENSIVE

Puppetry can be very cheap, or thumpingly expensive. We’ve been reduced to tears and put in fits of laughter by tiny characters made of nothing more than hands or scrunched brown paper. But, we’ve also created entirely digital worlds full of colour, life and cutting-edge technology.

It takes a big team! The joy of integrated elements coming together is that there’s always at least one designer behind each of those elements. We usually always work with a Projection Designer, Lighting Designer, Sound Designer, Puppet and Props Designer, Costume Designs and Composer to create a highly visual and shared language.
8. PUPPETS CAN BE YOUR BEST FRIEND, OR WORST ENEMY

Puppets can be your best friend or your worst enemy! Unlike human actors, puppets don’t have to obey the laws of physics and open up incredible potential for the sort of stories that can be told on stage. On the flip side though, they only ever really work under super specific circumstances because they rely on an incredibly fragile illusion, that is built between the performer and the audience. Let’s be frank, there’s also an awful lot that humans just do better (i.e walking, breathing and you know, being alive).
4 cast members onstage in the Harbinger by Dead Puppet Society in 2017
Pitcured: The Harbinger, 2012 (La Boite Theatre & DPS).
9. THE EMOTIONAL RESPONSE IS DIFFERENT TO OTHER ART-FORMS

Visual theatre evokes a different kind of emotional response than realism or other text-based theatre. It awakens all of the senses, and asks for a different sort of imaginative engagement, because it’s not just concerned with characters and a story but with building an entire world, which is why we really love it.

10. COLLABORATION IS KEY
Like all good work, collaboration is key. Even though the structures that we work in might resemble a traditional theatre-making model from the outside, the reality is that it’s far more collaborative. When we’re building work that integrates the elements to the extent that a DPS show always does, it’s almost impossible to draw a line between where the work of one creative begins and another ends.

All of our creative decisions are the result of intensive cross-fertilisation. It might not take an entire village to grow a visual theatre show, but it sure as hell takes a strong community!