Bluesfest 2019, the Year of Artist Collaborations! “We drove up the driveway and we just started screaming in the car a little bit because there’s this amazing feeling about being here. We’re just so excited. It’s hard to sit down in a place like this, there’s just a mojo underneath you! [Bluesfest] allows us to expand our musical pallet”. Vintage Trouble

“The crowd really make the show. I love the backstage at Bluesfest, you have enough space but all the artists get to meet and hang out together” Hozier

“Our 30th was just wonderful’ said Peter Noble, Festival Director of Bluesfest who in their 30 years has become the most highly awarded festival in Australian show business history. He added “We tried some new things and it seems they really worked! Jack White’s The Saboteurs were absolutely brilliant. There were more great Australian artists such as Tommy Emmanuel, Paul Kelly, Julia Stone, Russell Morris, incomparable Kasey Chambers and more including original Australians Yothu Yindi, Archie Roach, Baker Boy, Mission Song, Mojo Juju and many more.

Our new artists playing the festival for the first time who have created a new home in Australia include Deva Mahal, Larkin Poe, the Marcus King Band, I’m With Her, Ray LaMontagne, Anderson East as well as Jack White with his band the Saboteurs, the incredible Miss Velvet and the Blue Wolf and so many more delighted our audience. Of course, the headliners were loved and the return of both Ben Harper and Jack Johnson were major moments. The list is never-ending. But I would like to take a moment to hail Melody Angel who is emerging as a bonafide star at Bluesfest and we expect to see major things for her, just like Lukas Nelson! Our audience is telling us what a great time they are having, and the truth is, we just want to do it all over again!” For the full interview. See here.

As we get ready to turn out the lights and switch off after a whopper 30th Anniversary Celebration, the Bluesfest team is truly amazed by the spirit and vibe the crowd and artists create in Byron Bay year on year. It really is something special. With a crowd of over 105,000 over the five-day event which celebrated its’ 30th Anniversary in great fashion like no other with numerous artist collaborations including Mavis Staple & Ben Harper, Kasey Chambers brought Ben Harper and the Veronicas on stage with her for her 30th. 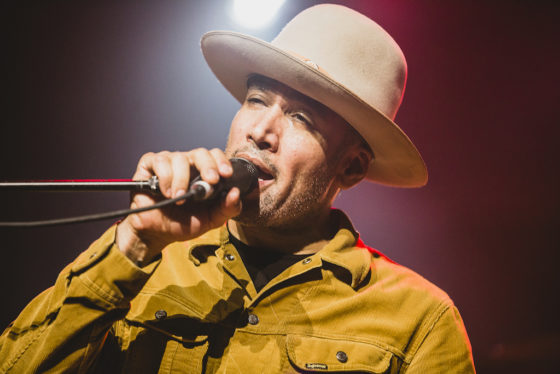 As always, the Boomerang Festival precinct was the heart and soul of Bluesfest and home to dozens of inspiring performances from artists including Archie Roach, Yothu Yindi & the Treaty Project, Dallas Woods, Benny Walker and many others. Not forgetting Baker Boy who drew crowds in their thousands to his performance on Friday afternoon. It ended on Sunday afternoon with a powerful Closing Ceremony with artists from across the festival coming together to perform dances, chants and traditional calls form the nations represented to celebrate the beauty and sacred power of First Nations people from Australia and across the world. Festival Director, Rhoda Roberts said “Boomerang had a spirit this year that resonated across the Bluesfest site, from the eclectic line up of First Nations music, to the dance, story and workshops. There truly was something for everyone”.

The Busking Competition was won by Gold Coast’s Electrik Lemonade. The merry band of funklords play a repertoire of Funk, Hip-Hop, Blues, Soul and Dance music, we’re stoked to see what they go on to do in the future. The annual Cystic Fibrosis guitar raffle raised over $60,000 on site with winners of the signed guitars being announced from the stage on Monday night.

· 21 days to build the festival site

· 2.5 tonnes of vegetables consumed by artists and staff alone!

· 912kg of meat eaten in the crew and artist catering this weekend!

· Over 600kg of avocados sold at the Avocado Hut onsite!

Tickets for Bluesfest 2020 are available online to 2019 ticketholders only from $430 for a five-day ticket. Tickets will be available to the general public from 29 April 2019.