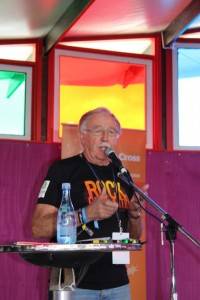 To be staged annually over the October Labour Day long weekend at the Bluesfest site and featuring an eclectic line up of artists from around the globe, Boomerang Festival will be a unique world cultural exchange where audiences will experience living cultures through traditional and contemporary music. Featuring some of the world’s oldest instruments, dance and rituals along with traditional arts practices and workshops with a focus on mother tongues and first instruments.

This multi-arts event is the first of its kind and will be a three-day camping experience opportunity where audiences will be personally touched by the experience of connecting and embracing the social, cultural and the spiritual aspects of Australia’s First peoples traditional lives and contemporary practices from across the globe.

“Language its has been said is the light of the mind, combine that with the revitalisation and the return of some ancient traditions and practices from an eclectic  line up of artists and you have a unique festival experience”, says Festival Director Rhoda Roberts. 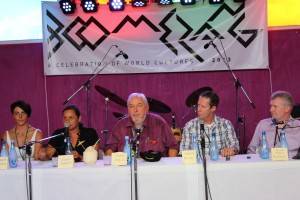 The Boomerang Festival has the desired aim of ending the disparity in life expectancy between Aboriginal and non-Aboriginal Australia by providing an annual creative event that builds strong partnerships and showcases first Nations to their advantage, quite simply by their culture.

“This is a special moment for me personally, and for us all – hosting a significant cultural event on the Bluesfest site which is actually Bundjalung country not only makes sense, but makes me proud. Through the  healing of music, the rhythm of  language  and the power of  dance, it’s time to have fun and gather as we recognsie the similarites we all share,” said Bluesfest boss Peter Noble

In addition to world music,  Boomerang Festival will  define a true  sense of place and belonging  through some daring workshops, and ideas, forums and intergenerational exchange programs.

life. Earlier in the day a creative panel discussion on the subject of How world cultures,

Keeping the celebration alive The Lotus Palace has programmed nightly showcases during this year’s Bluesfest featuring the above mentioned artists and more>>> Boomerang.