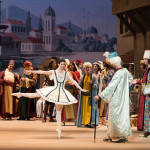 ON CENTRE STAGE  With  Douglas Kennedy

The Bolshoi Ballet’s Back:  Big Time

The Bolshoi, which simply means big in Russian, has returned to Brisbane for the first time in nearly two decades and it is bigger and bolder than ever.

Russia’s premiere ballet company has come back with a $600 million-plus make over worthy of a Tsarina from the royal court, which in Russia (incidentally) was swept away nearly 100 years ago.

The season opened with a new production of Le Corsaire, which premiered in France in 1856, inspired by Lord Byron’s 1814 pirate poem of the same name, which sold more than 10,000 copies when first released.

The original production, which featured the work of French choreographer Joseph Mazilier and composer Adolphe Adam, was quickly lost in the mist of times as six other composers made contributions well as a team of formidable directors and choreographers.

Today’s production is largely based on Marius Petipa’s reinvention of the work in 1868 and finally in 1899 when the template for today’s modern production were fine tuned into a complex tapestry of design, choreography and score.

The other work in this double header is the 1935 ode to the new generation of farm workers on collectives in an era of great upheaval, The Bright Stream, and showcases the genius of Shostakovich whose soured relationship with dictator Joseph Stalin blighted his career.

He never composed for the ballet again after Stalin’s journalistic mouth piece, Pravda, dismissed his work as , ‘music without character,’ and labelled the ballet as a, ‘balletic fraud’  but the one good thing about tyrants is that – like the rest of us – they don’t live forever.

Now The Bright Stream is back and touring the world to great acclaim being championed as a great piece of fun ballet with its jokes and mannerisms designed to send-up what was in many ways a dark period in Soviet history.

But despite being ‘big’ and it certainly is that in shape and form, the Bolshoi is only one piece in the Queensland Performing Arts Centre’s emerging puzzle simply known as the QPAC International Series, designed to put Brisbane on Centre Stage.

The visit is part of a larger marketing strategy to put the Queensland capital well and truly in the national spot light with an ongoing series of one-off classical productions, which won’t be seen elsewhere in the country.

Naturally, Brisbane – and QPAC – has scored a series of artistic bull’s-eyes with seasons by the Paris Opera Ballet, the Ballet Nacional de Cuba as well as performances from the London Philharmonic Orchestra and the Academy of St Martin in the Fields.

However, the International series is designed to emphasis the city’s cultural standing and it has already paid dividends in its first year – 2012 – with Hamburg’s Ballet, Philharmonic Orchestra and State Opera attracting more than 20 per cent of its audience from inter-State.

This year QPAC is doing even more to enhance the Bolshoi experience with workshops, corporate gigs, specials for kids, meal and accommodation packages and even a regional simulcast of Le Corsaire beamed to eight centres throughout the State this week.

This makes the International Series both inclusive as well as exclusive and promotional supports – including a ballet costume exhibition Tools of the Trade at the Tony Gould Gallery and a montage through the QPAC tunnel (in front of the stage door) – are well worth catching.

The International Series – which is already enhancing Brisbane’s standing as an arts tourism mecca – will continue next year with another program to be announced at the conclusion of the Bolshoi season.

Credits to photos … Darren Thomas and feature Maria Alexandrova as Medora and Vladislav Lantratov as Conrad.