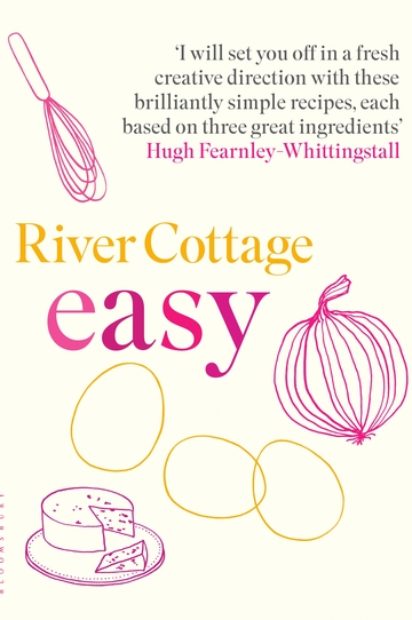 Overall, celebrity chefs tend to fall into two categories. There are the artistic wunderkinds like Heston Blumenthal- the sort of chefs with a habit of turning meals into a carnivalistic, often hedonistic, delight for the senses, rich with spectacle and showmanship. And then, there are chefs like Hugh Fearnley-Whittingstall.

Fearnley-Whittingstall isn’t big on the idea of turning food into a spectacle. After all, it’s far too easy to get carried away, to focus on the visual elements and forget that the most important part of a meal is the taste. Simple fare, to his mind, might not be as visually stunning, but at least you’ll know the flavours work well together.

There’s something to be said for simplicity, especially if you’ve ever been overwhelmed by the ‘home cook’ standards of shows like Masterchef™ in recent years. Fearnley-Whittingstall’s latest collection of recipes, ‘River Cottage Easy’ takes that love of simplicity and flavour and, if possible, simplifies it even further.

Every dish is created around three main ingredients, that work together to create the flavour. There are other ingredients as needed, of course- it wouldn’t be much of a cook book otherwise- but each dish is made to have three ingredients as standout flavours. Some of those flavours, you’ll likely know and love already. But others might well be new favourites in the making.

These aren’t the most complicated recipes you’ll ever find, and if you’re new to the kitchen, or not that confident in your skills yet, this is definitely a collection of dishes that won’t overwhelm. But even cooks with a long and noble history in the kitchen are likely to find new, delicious dishes to try.

The fun of ‘River Cottage Easy’ rests in the theme. It’s novel enough to get you looking at your produce with fresh eyes, and inspiring enough to get you trying your hand at new flavour combinations- or at least contemplating them. This isn’t the sort of book to flick through once, admire the pictures, and then throw onto the shelf. There are quick and easy recipes galore worth an investigation, even if a few of the ingredients might require a trip beyond your local shops.

Fans of Fearnley-Whittingstall should note, though, that ‘River Cottage Easy’ is an updated reprint of his earlier book, ‘Hugh’s Three Good Things’, so unless you feel the driving need to own the entire Fearnley-Whittingstall back catalogue, you can probably give this one a miss. After all, you’ve already got the recipes in your collection. But if you’re new to his work, or simply looking for some new meal ideas simple enough to avoid end-of-day overwhelm, you’re probably going to get a lot out of ‘River Cottage Easy’.

‘River Cottage Easy’ is published through Bloomsbury, and is available at leading retailers.