2016 achievements holistic organisation reflection self help by Caroline Russo | on February 12, 2016 | 0 comments | in Book Reviews | Like it 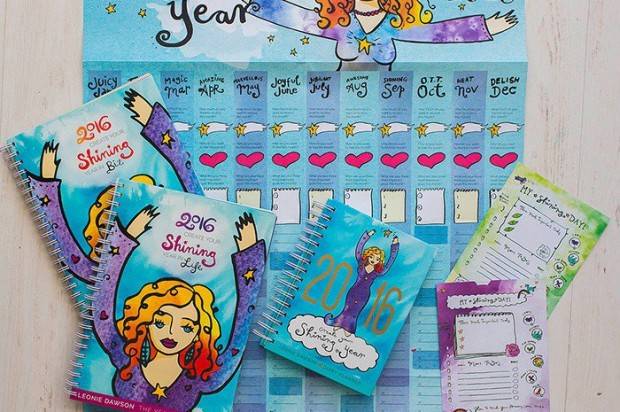 Now that 2016 is here, there’s a growing sense of panic about changing our wicked ways, and finally getting organised. In response, there’s a few million organisation systems out there, falling along a spectrum from strictly professional to deeply spiritual. One of the most popular out there is the Create Your Shining Life series of workbooks and planners created by Leonie Dawson.

Leonie Dawson is an Australian self-help expert with a love of helping people not just make the most of their lives, but their businesses as well. If you think that business skills and a well put together life means business suits and seriousness, you’re in for a surprise with Leonie. For all that Leonie can seem at first glance like the stereotypical Byron hippy, she’s an incredibly savvy business woman who has been nominated for multiple business awards.

Leonie might not be your taste if anything remotely affirmation-like or hippy-ish sends you into a frothing rage. But if you’re looking for a more holistic approach to making the most of the coming year, this is quite a popular system to explore. The Create Your Shining Year workbooks are a well-loved yearly institution, with devotees around the world.

There are three main parts to the series: the 2016 Create Your Shining Year in Life workbook, the 2016 Create Your Shining Life in Business workbook, and the yearly planner. Each can be bought on their own, or as part of a set, so you can pick and choose the elements that will be useful to you. Though the planner is only available as a physical book, the workbooks can also be purchased as PDFs if you want to print them out yourself.

The imagery is, as is typical of Leonie’s work, hand-drawn and water-colour centric, with a focus on beautiful colours and flowing lines. It’s a series of books that will likely appeal to artsy types, with the potential to startle those used to simplicity and clean lines.

The paper the workbooks are printed on is beautiful and thick, but it is shiny enough that only certain pens will work properly on it. A friend and I tried some experiments: gel pens and textas are a no go, and pencil seems to be just as problematic. Having said that, it’s thick enough that you can have a field day with Sharpies, and that’s surprisingly therapeutic.

The wire binding is good and sturdy, so that it can stand up to at least moderate handbag damage if you’re taking the planner with you. It also means you can rest any of the books flat, or fold them over without issue- always a good thing when they’re books you’ll be going back to throughout the year.

And that’s the point of Leonie’s system: this isn’t a technique where you spend an hour writing and then never look at it again. It’s a collection of resources to refer back to over and over throughout the coming year.

Humans are complicated creatures, and when it looks like work, such intensive systems tend to be quickly avoided and deemed overwhelming. But the beautiful and life-affirming elements, alongside Leonie’s laid-back and open-hearted style of writing makes it incredibly hard to think of this as anything other than guided play.

What I love most about the workbooks is its focus on reflection. Before you even begin thinking about your goals for 2016, you’re asked to look back over 2015 and see what went well, and what really didn’t. It can be uncomfortable to acknowledge the imperfect moments, but if you’re the sort of person with a habit of overlooking your own achievements, this can be an incredibly eye-opening activity.

From there, the workbooks guide you through figuring out what your goals are around a range of life and business themes, letting you figure out not just what you want to achieve, but how you’ll do it. The questions are detailed without treating you like an idiot, and informal enough that it doesn’t feel like an interrogation, or even like homework.

Since the first versions of the workbooks, over 200,000 people have used Leonie’s workbooks to get clear on what they want to achieve, and there’s a mountain of success stories available, either through the official website, or through a quick search online.

The effort required might be off-putting to some, but if you’re looking for a way to really figure out what it is you want to achieve and how to go about it, Leonie’s workbooks are certainly a visually beautiful way to go about it.

A warning, though: Leonie is based in Australia, but her prices are in US dollars, so make sure to check the exchange rate before you hit that ‘buy now’ button.

The Create Your Shining Year series is available through http://leoniedawson.com or https://shiningacademy.com/2016-workbooks/.