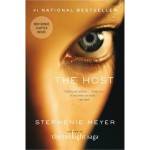 The Host by Stephenie Meyer

With the recent release of The Host on DVD, I decided to give the book a try.

With the world overtaken by alien souls who must kill humans in order to use their body as their host, only a handful of real humans are left and fighting for their survival.

One soul, Wanderer, is implanted into a body and must help the aliens locate and destroy the humans. However the former owner of the body, Melanie, isn’t going to die without a fight. She haunts Wanderer’s mind, refusing to let go.

Convincing Wanderer to fall in love with her soul mate, Melanie leads the alien to her former family hidden deep in the desert.

As the others come to terms with the soul and human in one body, she struggles to fit in and convince them she is not like all the other aliens. She means them no harm, she won’t betray their secrets, she just wants Melanie’s former life to be her own.

With the world crumbling around her, constantly living in fear for her life, and the humans who refuse to accept her, Wanderer believes she will never fit in anywhere. Her only solace is the one human that loves the soul instead of the person she used to be.

A complex plot that is essentially two love stories entwined together, The Host was a wonderful surprise and completely not what I expected. The moment it gripped me, I could not put it down. Even when I had to, I was still thinking of it and wondering what on Earth was going to happen.

With none of the fanfare of the Twilight Series, Meyer has written a perfect love story that is as unpredictable as a summer storm. Put everything you know about the vampire series aside, and get lost in the story. You won’t regret it.