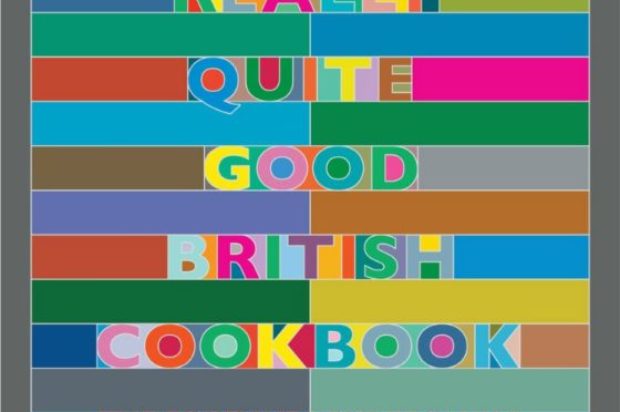 There’s long been jokes that British cooking is dull, tasteless fare. Self-deprecation, stiff upper lips, and stodgy food are the stereotypical signs of Britishness, after all. But, if you can look beyond the teasing, Britain has given us some of the best chefs of the current crop. Nigella Lawson, Jamie Oliver, Marco Pierre White, Gordon Ramsay, Rick Stein- so many of the names we know and love come from Britain.

I don’t know about you, but I’m not sure I’d want to crack a joke about British cooking to Gordon Ramsay.

The British have conquered our culinary reality television programs, and many have reached near godlike status among aspiring home cooks. Whether it’s the Naked Chef’s simple, hearty and affirming fare, Nigella Lawson’s hedonistic delights, or even Gordon Ramsay’s scream fuelled feasts, they’re the names we know, and the names we trust when we want new recipes to try.

There are many collections of celebrity recipes in the world, but none quite like ‘The Really Quite Good British Cookbook’. Partly, it’s because of the name- it’s really hard not to love a quirky title like this one. But mostly, it’s because this book is what happens when you take 100 of the biggest and best of Britain’s culinary wonders, and ask them a deceptively simple question: what do you cook for yourself, and the people you love? The result is a gathering of decadent, delectable, and unsurprisingly wonderful recipes you’ll want to try as soon as humanly possible.

Part of the beauty of ‘The Really Quite Good British Cookbook’ is that it humanises often mythologised culinary professionals. We imagine these chefs as their professional alter egos, forgetting that once the camera crew leaves and the day is done, they’re probably not going to want to be creating two hundred process culinary delights. Though we’re used to seeing the staggeringly complex from many of these chefs, the recipes here tend to be easy enough that us mere mortals have a good chance of making them work. This isn’t a showcase of recipes you’ll never try: the majority are easy, affordable, practical meals that almost anyone can make.

Having said that, these aren’t the quick and easy dishes best described as ‘slap-dash’ cookery. You’ll probably need the odd ingredient you might not have to hand, but overall, the recipes look so delicious it’s hard to begrudge an extra trip out for supplies.

‘The Really Quite Good British Cookbook’ is also a fantastic philanthropic venture in its own right. This isn’t just a cookbook showcasing talent- proceeds go to help the Trussel Trust; a UK organisation that helps those needing help to keep food on their tables. So while you’re getting to try new, glorious dishes, you’re also helping support vulnerable families in their hours of need.

‘The Really Quite Good British Cookbook’ is the sort of recipe collection you’ll likely find yourself turning to over and over again, full of new flavours and old, comforting favourites to add to the meal rotation. If you’re looking for a wealth of new ideas, you’re probably going to want to get your hands on a copy of this book.

‘The Really Quite Good British Cookbook’ is published by Echo, and is available through selected retailers.