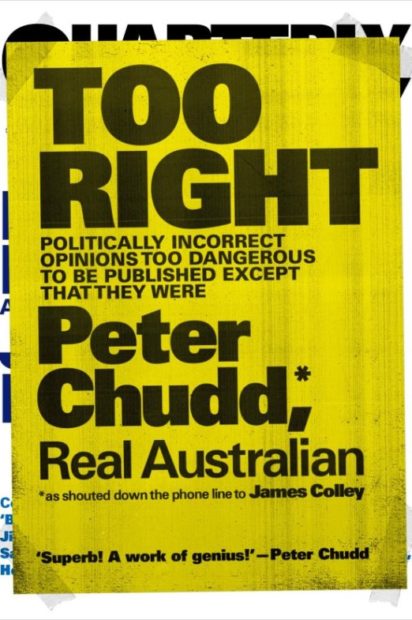 In a world of political turmoil, only one man is strong enough to stand up against those unwashed miscreants with ‘science’, ‘evidence’ and ‘right’ on their side. Peter Chudd: Real Australian.

The truth is, Australia has a proud history of mocking the living daylights out of people who are a little too up themselves, and with the political dumpster fire of 2017, it’s only fair that someone would turn their attention to the political posturing and celebration of the loudly ignorant.

‘Too Right’ isn’t a serious conversation about politics and social issues. Instead, it’s an engaging look at the twisting and contortion required to maintain beliefs and opinions in the face of… well, reality. From the faux-victimhood of shock-jockeys and former politicians bemoaning being silenced from a wealth of paid speaking opportunities, to the horrified pearl-clutching brutality of the anti-Safe Schools brigade, author and all-round funny bloke James Colley has captured the dark heart of the more high-spirited right-wingers, capturing that brash ignorance and bold refusal to accept anything less than constant praise with more warmth and kindness than might well be deserved.

The satire here is brilliantly done- it’s close enough to reality that it feels true while ripping away the jingoistic propaganda and rhetoric to explore the truth behind the fears that seem to grip a worryingly large percentage of the community.

It would have been easy to create a book to mock the people- and that would certainly find itself a rather large fanbase. And yet, Colley bypasses the easy option, choosing instead to launch a scathing attack on the ideas, and the exhausting requirements that go into maintaining them.

It’s less calling people idiots than it’s contemplating why good, intelligent people find themselves in such a mental minefield.

Though it’s certainly a politically savvy, aware read, ‘Too Right’ is also laugh-out-loud funny, with the sort of snarky quips it’s impossible not to love. Colley has worked wonders here, capturing the voice and brashness of right-wing commentary without falling into mockery for the sake of being right. If you like your comedy with a heaping side order of social commentary and current events, you’re probably going to love ‘Too Right’.

‘Too Right’ is published by Allen & Unwin, and is available through the publisher’s website, and at all the most discerning bookstores. Naturally.