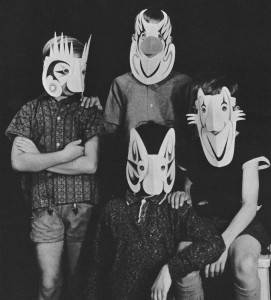 Theatre’s most legendary death scenes are collaged together to create the darkly comic Oedipus Schmoedipus. It features all of the death scenes from 200 celebrated plays of the Western Canon – the most prestigious plays and people of Western theatre. Oedipus Schmoedipus is the brainchild of Mish Grigor and Zoe Coombs Marr, two thirds of the Sydney-based, three-woman collaborative performance ensemble, post; and is currently a work-in-development.

“[The title is] sort of an hommage… and a gentle piss-take. A loving piss-take,” according to Zoe. “There’s always a production of Oedipus on,” she said, and she’s pretty much spot-on. There was a production of Oedipus – Bêt Noire at Theatre De La Ville in Italy earlier this month. In June, Oedipus will be performed at Memminger Auditorium in the USA;  as well as a contemporary adaptation, Oedipus El Ray, at Victory Gardens in the USA. Oedipus El Ray will also be performed at A Contemporary Theatre in the USA this December. In September, Oedipus will be performed in Australia’s Malthouse Thearte… and so on, so forth.

This form of immortality that theatre’s most prolific pieces resonate, contrasted with the recurring theme of Death, fascinated Zoe and Mish. “The Canon is immune to death, but death is such a big part of The Canon,” Zoe observed. “It’s an interesting topic to tackle.”

Zoe and Mish spent months and months reading Western theatre’s most famous plays, taking every reference to Death, cataloguing them, and re-compiling them to create something new. The first major development performance of Oedipus Schmoedipus took place in Sydney last year, and the second is coming to The Powerhouse in Brisbane for the World Theatre Festival’s Scratch Series next month.

Scratch Series offers artists a chance to ‘test-drive’ works-in-development for a live audience; and offers audiences a sneaky peek into the creative process. “It’s [performing an unfinished piece] sort of nerve-wracking, but it pushes you towards a public outcome, and putting your work on stage. It’s really good for developing new work,” said Zoe.

Zoe and Mish are unsure at this point when Oedipus Schmoedipus will be seen in theatres as a polished piece, but you can catch their second stage performance at the Brisbane Powerhouse’s Rooftop Terrace from Friday 22nd of February – Sunday 24th. It runs for 60 minutes, costs $10 per person, and is suitable for people aged 12 and over.

Book now at www.brisbanepowerhouse.org, or phone (07) 3358 8600. There will be a third major development performance in Melbourne later this year.