Kylie Thompson Matthew J. Hellscream The Carnifex Kickstarter by Caroline Russo | on August 24, 2015 | 0 comments | in Books | Like it There have always been stories about the big cats of Queensland. Sometimes they’re the decedents of military mascots released at the end of a war, abnormally large ferals, leftovers of abandoned zoos, or circus escapees. But in the world of Matthew J. Hellscream’s latest novel, Carnifex, the stories of predatory cats in Australia are a lot bigger, and darker, than anyone would suspect.

This week saw the launch of the Carnifex Kickstarter campaign, and within 24 hours, the initial goal was met. For those who haven’t had a chance to explore Kickstarter, what this means is that Carnifex is definitely going to be published in ebook and physical forms. The first stretch goal, cover art by artist Frank Walls, has also been achieved, and at present the campaign is $400 dollars away from an official book launch at Avid Reader in West End.
Hush Hush Biz spoke to Matthew to find out more.

Though Australia is a country with an overabundance of lethal wildlife, big cats aren’t a part of the modern food-chain. Even though none of our apex predators are feline, the legends of them linger on throughout Eastern Australia, including in Matthew’s home town.

“I grew up in Maryborough, and we had pretty regular sightings of the ‘Tiaro Tiger’. I love reading about cryptozoological animals, and the consistent myths of big cats roaming the bush made me start to think that it’s possible that something might be out there. Maybe not a big cat, but something ancient and on the verge of extinction. In my research I stumbled across a scanned copy of the Rockhampton Morning Bulletin, 27th of December, 1932, reporting that a marsupial lion had been shot. 1932 is not all that long ago, especially in a country as large and uninhabited as Australia.

There’s every chance that something could be surviving in isolation out there.”

Though Carnifex is clearly focused on the idea of an unknown apex predator, Matthew didn’t want the human characters to be only potential victims, or the towns to be stand-ins for Anywhere, USA. “We’ve all passed through that small town where you feel like you’re being watched. You feel like everyone has a secret. Carnifex was inspired by that feeling of unease, along with my own interest in the Queensland Big Cat myth… It’s really grounded in reality. I didn’t want to make any of the elements fantastical. I wanted it to feel like something that could actually happen in outback Queensland.”

Clearly, this may not be the ideal read for those about to tour outback Queensland, nor those on a camping trip. But for those of us not planning a bushwalk after October, or those with a tendency to look at the rugged bush landscapes and wonder ‘what if?’ this might well be a must-read.

Matthew J Hellscream didn’t just start his publishing career through Kickstarter, he was the first Australian novelist to use the crowd funding platform for independent publishing. For Matthew, it was a no-brainer to use Kickstarter again for his second novel.

“I didn’t think there would be much chance of getting picked up for a scifi horror novel. Kickstarter saw a lot of success for a lot of indie creators in the US, so when it launched in Australia I figured I had to give it a shot. I went back to Kickstarter for Carnifex because success as an indie writer is all about getting your name out there into the public space. I could have self-published straight to Kindle, but Kickstarter offers a unique connection to your audience, and helps get the word out about what you’re doing.”

A growing number of indie authors are seeing the benefit to crowd funding. Sites like Kickstarter are a rally point for supporters of ideas, and an arguably egalitarian way for creatives to ask for help in funding their endeavours. No connections in the publishing world are needed, nor patrons or rich relatives to support your way. Just the creative and their idea, and an army of people willing to financially back someone else’s dream. The power is entirely with the buyer. Though it can lead to silliness, such as the funding of a potato salad which raised over US$55,000, crowd funding can also be a way for new and emerging writers, and genres, to get a chance at publication.
Frank Walls, the artist responsible for the gruesome cover art for Matthew’s debut novel, Metro 7 is now officially on board to design the cover art for Carnifex, and his involvement guarantees that the cover art will be spectacular.

Carnifex is shaping up to be a powerhouse second novel from a talented Brisbane author, and I for one can’t wait to get my hands on a copy. 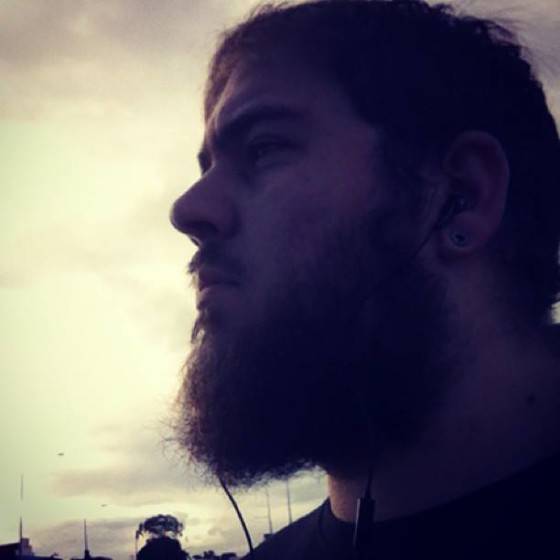 The Carnifex Kickstarter campaign runs until September 20, and can be found at https://www.kickstarter.com/projects/matthewjhellscream/carnifex-an-australian-horror-novel. Funding amounts, each with their own rewards, range from $10 to $75.