CHILDREN’S ARTWORK SHARES HOPES AND IDEAS FOR THE FUTURE 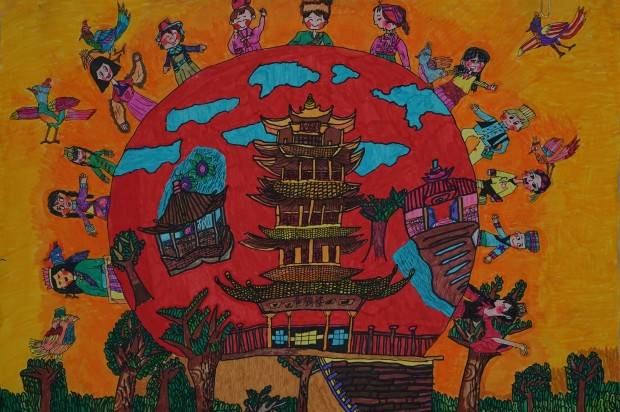 NO TUNNEL VISION AT OUT OF THE BOX

The Honourable Kate Jones MP, Minister for Education and Minister for Tourism and Major Events, paid a visit to Queensland Performing Arts Centre (QPAC)’s Out of the Box today to view a dedicated children’s art exhibition in the QPAC Tunnel and announced the names of four large ‘Creatures’ taking pride of place in the Festival’s design.

A highlight of the 2016 Out of the Box Festival, the One Sun, One World – Many Dreams, exhibition showcases 200 artworks created by children especially for Out of the Box and features drawings, painting, printmaking, and photographs of the child-artists.

Ms Jones said the Palaszczuk Government was pleased to provide support for the exhibition.

“The creation of this exciting exhibition has involved over 1000 participants across Queensland and in Hubei, China,” she said.

“Children were engaged in the lead up to the exhibition with workshops held across Queensland.

“We’re delighted to be able to support this festival and encourage creativity and imagination in Queensland children.

“It’s great to be connecting children in Queensland with young people in China through art, helping to highlight the importance of cultural learning even at a young age.

“I’m encouraging everyone to come and take a look at this incredible artwork and enjoy all the festival has to offer,” said Minister Jones.

QPAC Chief Executive, John Kotzas said Out of the Box embraces children as important arts participants and creators now…not just in the future.

“One of the drivers of the 2016 Out of the Box festival has been putting children in the expert’s chair and recognising that we as adults have things we can learn from them.

“It is wonderful to see the results of the 200 workshops which Out of the Box facilitated at schools across Queensland to create elements that are proudly featured across the Festival.

“Children’s creativity is on show throughout Out of the Box including thousands of colourful lanterns. These lanterns were designed from artworks created by 2500 children in schools, kindergartens and crèches across Brisbane in artist led workshops conducted over four months leading up to the Festival.

“There are also four 3 to 4-metre high ‘Creatures’ located across the Cultural Precinct. These fun installations were designed by Josh McIntosh who took inspiration from the children’s art created in the lantern workshops.

“The creativity was not just confined to Brisbane, with children in regional Queensland, who attend eKindys as part of ‘The School of the Future Program’, also getting into the spirit and making their own lantern artworks.

“I am sure children and their families are proud to see their works on display at the 2016 Festival,” said Mr Kotzas.

During her visit to Out of the Box, Minister Jones also officially announced the names of the four Out of the Box Creatures. Children who attend eKindys were invited to suggest names for the Creatures and the winning names are:

Taking place until the 28 June 2016, Out of the Box provides a rich arts-based program for both schools and the general public. The Festival crosses over the end of the school term and into the first week of the school holidays.

The event takes over all of QPAC’s theatres, and spaces and extends across the Cultural Precinct and South Bank in collaboration with Queensland Art Gallery | Gallery of Modern Art, Queensland Museum, State Library of Queensland and South Bank.

Out of the Box has been curated by QPAC for 24 years and is the only arts festival in Australia dedicated to children eight and under and one of only a few in the world. It’s also the nation’s largest early childhood arts festival with more than 103,000 participants in the 2014 festival. For tickets and for full program please go to www.outoftheboxfestival.com.au