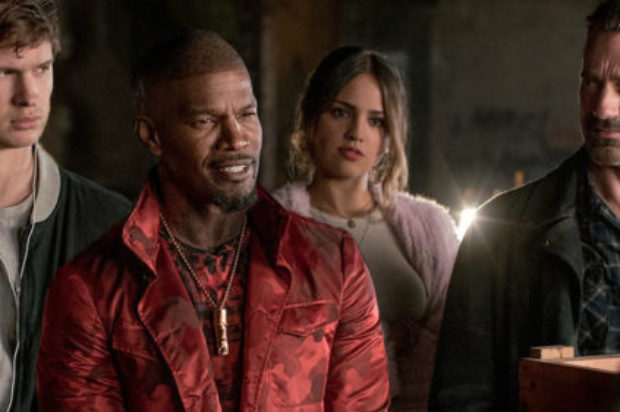 ‘Shaun of the Dead’ helmer Edgar Wright has expertly crafted his freshest idea yet in the form of ‘Baby Driver’, an original action-comedy of sorts whose movements rely on the pulsing soundtrack and not the other way around. This is a film that pushes its concept to the limit, and has an awful lot of fun doing so in the process.

Ansel Elgort is the titular Baby, a fresh-faced getaway driver working under the stern thumb of crime boss Doc (Kevin Spacey, terrific). Doc never uses the same team twice when executing his heists, except for the constant that is Baby as the driver, and the main plot point for Wright’s romp focuses on a final job that promises to be the last crime-centric endeavour for Baby; Jon Hamm’s volatile Buddy, Eiza Gonzalez’s feisty Darling, and Jamie Foxx’s impulsive Bats round out the motley crew.

Living his life via the rhythm of his own carefully selected iPod playlist, Baby’s penchant for experiencing music during his drives is more necessity than habit as his involvement in a car accident as a youngster left him with tinnitus, leading the soundtrack of his daily routines to act as a snappy distraction. In addition to the film choreographing action sequences to the sounds of such tunes as “Tequila” or “Neat, Neat, Neat” by British punk-rock band The Damned, there’s the inclusion of Baby’s own mixtapes, recordings he specifically makes from audio snippets experienced in his day-to-day life; one entitled “Was He Slow?” – a question asked by Doc to the initially doubtful Bats – gets a healthy highlight, much to the joy of the audience enamoured with this quirky experience.

With Baby’s own dreams of heading west, in a car he can’t afford, with no plan in mind, it only makes sense that there be a girl to take along on this journey, and Lily James proves the perfect embodiment for his affections in the form of Debora, a young waitress who is instantly smitten with Baby and quickly saddles along for the ride; their first date, set inside a laundromat, is a brief scene of subtle beauty as they unite over music, with the clothes spinning in uniformed time.

Whilst there’s much to love and appreciate about ‘Baby Driver’, the film perhaps overdoes itself in the final moments, but when there’s so much on offer to soak up and enjoy, you can easily forgive a few clumsy steps for what is, essentially, a well choreographed number. In a market saturated with sequels and reboots, Edgar Wright’s gloriously inventive feature is a healthy reminder that originality still exists in the cogs of Hollywood, and when compiled correctly can deliver a result worthy of viewers time, money, and attention.