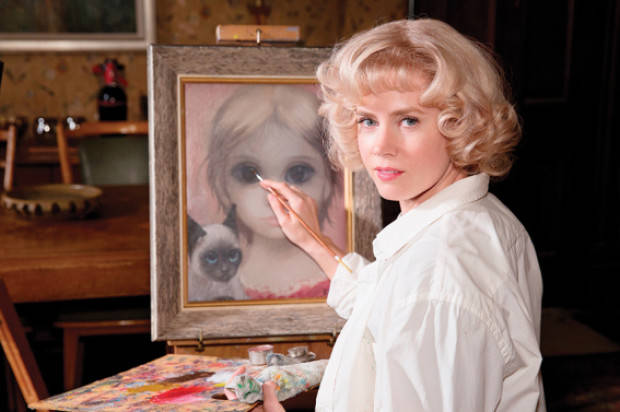 If ‘Alice in Wonderland’ and ‘Dark Shadows’ were anything to go by, Tim Burton was starting to severely lack in the direction department. Whether it be an absence of decent material, a sense of comfort in his own skewed genre, or putting too much faith in frequent collaborator Johnny Depp (himself on a downward spiral), his movies were starting to feel stale and all too familiar. Thankfully with ‘Big Eyes’ Burton has created one of his finest films, reuniting with ‘Ed Wood’ screenwriters Scott Alexander and Larry Karaszewski (one of the better projects in Burton’s filmography) to deliver an odd little tale that benefits from a fresh cast who are all virgins to the Burton world of cinema.

In the 1960’s the “big eyes” paintings were evidently all the rage which transformed silver-tongued artist Walter Keane into one of the biggest personalities the art world had ever experienced, generating a healthy profit with the then-novel idea of recreating his paintings as affordable poster art. As we have come to know, the true artist was Walter’s timid wife Margaret and the film paints an interesting portrait of a woman so intent on securing a stable lifestyle for herself and her daughter that she would allow her husband to take credit for her work. Due to this character trait ‘Big Eyes’ runs the risk of creating a truly irksome character in Margaret, but due to Amy Adams’ immense appeal, you can’t help but feel empathy for her, even when you don’t understand her.

The film itself is rather straightforward and void of the director’s usual eccentricities, telling Margaret’s story in a typical fashion (apart from the early imagery of 1950’s suburbia, the film is considerably diluted in Burton standards) which is still fascinating enough to hold interest from the early scenes of Walter courting the lonely Margaret, to the eventual courtroom showdown between the two over the rights to her artwork; these latter scenes seeming ripe with liberties but in actuality are toned down from what truly transpired. They say truth is stranger than fiction, and for ‘Big Eyes’ it couldn’t be more apt. By the time the aforementioned courtroom scene comes around, the film almost feels like an entirely different entity, thanks in large part to Christoph Waltz’s wild performance; the Oscar winner clearly having fun as the selfish, unhinged Walter. Though Waltz makes his presence felt portraying one of the year’s most hateful characters, and the support from the likes of Danny Huston, Krysten Ritter and Terrence Stamp all hold up pleasantly, ‘Big Eyes’ is Adams’ show through and through, the actress rightfully winning the Golden Globe for Best Actress in a Musical or Comedy earlier this year, and if there’s one thing to take away from the film, it’s that she is truly one of the industry’s most likeable and consistent performers.

Proving that there are other talents in his back catalogue he should be seeking collaborations with other than Mr. Depp, ‘Big Eyes’ is a striking return to form for Burton. Subtle and warm with just enough quirks, it’s a film that refreshingly lays off the spectacle and lets the story speak for itself.