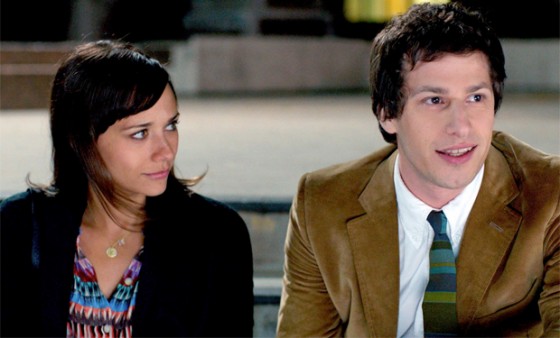 The idea of being involved sexually without the complications of romance has been a subject that has seen its fair share of incarnates in film over the last year or two, but the thought of a platonic relationship post-sexual involvement? That’s another story; one ‘Celeste and Jesse Forever’ decides to follow. Under the guise of a quirkier, less mainstream production the film does still adhere to some rom-com conventions in regards to characterizations and plotting but thankfully it’s far more subtle and quite happy to resist the token happy ending formula. And above all it’s very, very funny.

Celeste (Rashida Jones) works in a media market firm and defines herself as a trends forecaster. Jesse (Andy Samberg) is a slacker artist who clearly has talent but seems indifferent to finding work. They’re highschool sweethearts who are the best of friends and act accordingly; they go out on dinner dates, have inside jokes where they speak in humorous accents and make any miniature object into something phallic, mime affectionate gestures to each other, and frequently say they love each other. The only problem is they’re been separated for 6 months and are now in the final stages of their imminent divorce, yet the affection they still hold for each other stunts them from moving forward and because they are still such good friends the concept of boundaries pertained to a couple divorcing is lost on them.

It’s an odd premise for a film that sells the titular couple as being together ‘forever’ and it’s sure to be a foreign concept to many to have a divorcing couple be so present in one another’s life so intimately (the two still technically living together only adding to the complications) but screenwriters Jones and Will McCormack (who has an amusing role as a mutual friend of the couple who tends to solve his problems with pot) manage to somehow make sense of it all. The couple’s differing work ethics is a major factor in why they’re better off apart and eventually the plot throws enough obstacles in their way so they can learn to be Celeste and Jesse on their own. At times their actions can be quite frustrating and depending on what has taken place you either want to shout at them to “get back together already” or “just end it”, but as frustrating as it may be it’s never exhausting and the combination of Jones and Samberg make it that much easier to digest.

As she takes Celeste on her journey towards renouncing control and accepting the mistakes she’s made, Jones gives all of herself and the character emerges highly relatable, no doubt due to her role as script writer. She’s not afraid to make Celeste, and essentially herself, look foolish or act in the wrong way, and the comedic aspect to the character is never forced. Samberg, who is unfortunately left out of a great deal of the second half of the film, finally gets a chance to showcase his more dramatic abilities and downplays his usual style of humour. As wonderful as they are, the two are indeed working amongst a finely tuned support cast that also includes Elijah Wood as Celeste’s gay work colleague who seems incapable of surrendering to the homosexual stereotype (something we can be thankful for) and Emma Roberts as a bratty Britney-meets-GaGa popstar named Riley Banks who clashes with Celeste when she hires her to market her new album (which features such stimulating titles as ‘Do It On My Face’). Initially I pegged Roberts’ appearance in the film as nothing more than a glorified cameo and the butting of heads Riley has with Celeste to be quite typical but keeping in tune with the film’s left of centre approach to the genre, a relationship between the two evolves in an unexpected matter that opens Celeste up to the possibility that she isn’t always right.

Having written such a strong first feature I dare say there is now pressure on Jones in what to deliver next as she has proven herself not only a witty and relatable force on the page but as a leading lady as well. ‘Celeste and Jesse Forever’ may not always play by the rules but it doesn’t disregard them either so that those that dig their rom-coms will be turned away by its indie mentalities. In Brisbane this refreshing film is only currently playing at Balmoral Cinemas and Dendy Portside so please do yourself a favour and see it before it gets lost in the hub of Holiday releases.