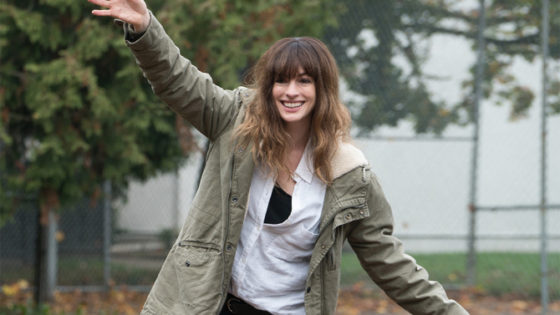 As much as the Japanese right holders to the enormity that is the ‘Godzilla’ brand would like you to think that ‘Colossal’ is trying to make a name by likening itself to the aforementioned giant lizard, Nacho Vigolondo’s tale is more a quirky character study than an overblown monster movie. And, somehow, despite the fact that this peculiarly inventive film presents us with the kind of outlandish premise that shouldn’t work, it manages to execute its plot line with relative precision.

Said premise involves the consistently-inebriated Gloria (Anne Hathaway) and her gradual realisation that she is psychically connected to a giant lizard currently attacking Seoul. The how and why as to what brings about this connection between the two are questions writer and director Vigolondo (a Spanish filmmaker with predominantly short horror segments to his name) showcases little urgency to answer immediately, instead focusing his energy on fully realising both Gloria and her childhood friend Oscar (Jason Sudeikis), the two reconnecting when she travels to her hometown in Upstate New York following her split from exhausted boyfriend Tim (Dan Stevens).

Even as it cuts away sporadically to news reports of Seoul’s inexplicable lizard attacks, much of ‘Colossal’ to a certain point feels somewhat conventional as Gloria and Oscar’s relationship garners much of the focus. Despite having no connection to Seoul, Gloria eventually discovers that she is the one controlling the creature, and after convincing Oscar and his friends (a sadly wasted Tim Blake Nelson and an endearingly thickheaded Austin Stowell) that this is indeed the case, ‘Colossal’ starts to gain momentum.

How Vigolondo has managed to mix offbeat comedy, fantastical spectacle, and dark character-driven drama together with this much ease is certainly a testament to his ability as a unique storyteller, and though the film indeed has its faults it can’t be denied that what he has attempted with ‘Colossal’ is truly, defiantly original. Perhaps what is most surprising though are the genuinely committed performances from both Hathaway and Sudeikis, with the former evoking the vane-less persona she adopted for her lauded turn in ‘Rachel Getting Married’, whilst the latter arguably delivering his finest work yet with a surprising dark role that subverts any of his usual nice-guy shtick.