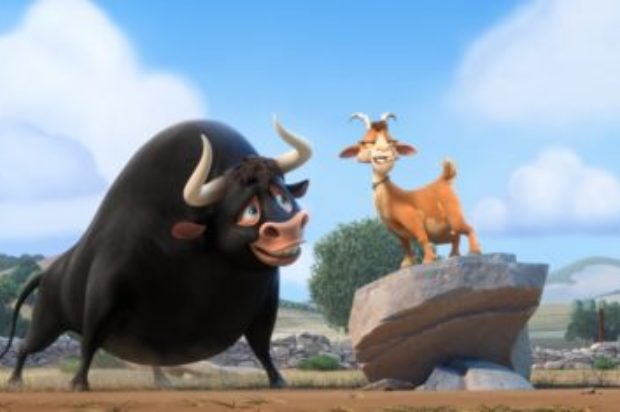 The beloved 1936 children’s book ‘The Story of Ferdinand’ has already flirted with the cinema thanks to Disney’s Oscar-winning short feature ‘Ferdinand the Bull’ in 1938. In 2017, it’s less Oscar-bait and more for the masses as ‘Ferdinand’ plays it decidedly sweet and simple with its tested “choose your own path” mentality and tween-friendly soundtrack.

The titular Ferdinand (voiced as a youngster by Colin Murphy and as an adult by John Cena) is a kind-natured bull who would rather sit and smell the flowers than face-off with matadors in the ring. At the training grounds of Casa del Toro most of the young calves dream of nothing more than to follow their fathers into the arena, but Ferdinand’s far too sensitive a bull to hear of it, and thanks to his loving pop (Jeremy Sisto, voicing possibly the most understanding parent outside of Michael Stuhlbarg in ‘Call Me By Your Name’) he is encouraged to follow his heart.

Following his father’s selection to fight in the ring – and, sadly, not returning home – an upset Ferdinand runs away, eventually crossing paths with young Nina (Lily Day). After a quick montage that offers a series of amusing visual gags depicting Nina and Ferdinand’s friendship, Ferdinand is sent back to Casa del Toro following the unintentional destruction he wreaks upon the local flower festival; a literal bull in a china shop sequence being one of the highlights of Ferdinand’s unfortunate incident at Nina’s favourite festival.

Back at Casa del Toro, Ferdinand’s initial presence is met with trepidation on the other bulls accounts, but when they realise it’s their long-lost, flower-sniffing Ferdinand they are decidedly unphased by his considerable stature. The sequences here with a fully-grown Ferdinand navigating his way through Casa del Toro, as stock standard as they are, provide the film some of its finest moments as Kate McKinnon’s unhinged comedic prowess shines through her voicing of Lupe, the “calming” goat, whilst the Swedish trio of handsome horses (voiced by Flula Borg, Sally Phillips, and Boris Kodjoe) roaming the fields next door lets the screenplay dabble in humour more suited for older audiences.

‘Ferdinand’ doesn’t reinvent the wheel in any manner, nor does it seem to want to, but for harmless entertainment aimed at the whole family, you could certainly do worse; it’s a shame though that, unlike ‘Coco’, this film doesn’t fully embrace its Spanish setting with its predominantly American cast. Cena and McKinnon do prove charismatic enough though to transcend their animated counterparts and any screenplay missteps, ultimately earning the film higher marks than deserved so this particular fable passes the test.