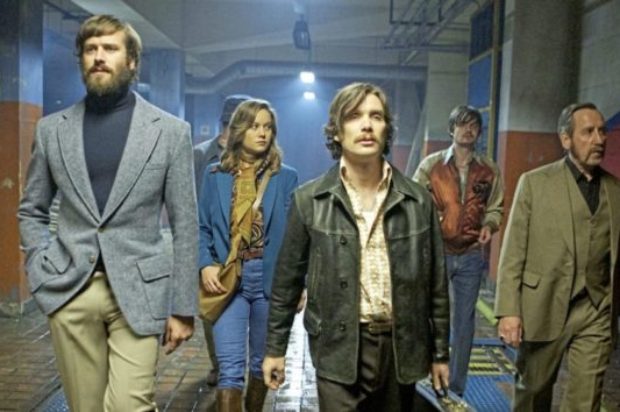 Feeling like a shoot-out action sequence stretched to feature-length, ‘Free Fire’ is writer/director Ben Wheatley’s first major attempt at the action genre after dabbling in primarily horror for the majority of his career. Assembling an impressive crew of talent both on-screen and off (Martin Scorsese serves as the film’s executive producer) there’s certainly enough playing in favour of this Tarantino-lite actioner, which ultimately makes it all the more disappointing that it’s unable to make the most of its reliable ingredients.

Keeping in tune with Wheatley’s other productions, ‘Free Fire’ is considerably strong on the European actor-front, despite its 1970’s Boston setting, with such talent as Sam Riley, Jack Reynor and Cillian Murphy all devoting themselves wholly to their less-than-heroic gangsters who have come together in a remote warehouse for an arms deal between the mob and the IRA; Brie Larson’s no-nonsense American has set the deal up, a suave Armie Hammer serves as a representative of sorts, and Sharlto Copley’s cowardly South African has the arms to sell.

A sale like this, with a crew all clearly unhinged, was never going to earn a smooth execution, and a pre-meeting altercation between Riley and Reynor reignites their distaste for one another, which starts off a chain of events that leads to the every-man-for-himself mentality the group adopts when they all respectively arm themselves for a shoot-out to the death.

On a technical level it should be noted that ‘Free Fire’ is quite sharp, with the sound design earning major points for effectiveness; the sound of gunfire on hand is quite deafening. It also looks the part with the 70’s era allowing some neat costume choices from the cast – Hammer looks magnificent throughout – and a musical choice of John Denver underscoring a particularly brutal scene highlights Wheatley’s strength in tailoring the surroundings of his features.

So why then, in a film that both looks and sounds good, is there such an underwhelming taste left when all the carnage is done with? Most of the actors on board deliver reliable performances – I say most as Copley’s egocentric arms dealer is beyond grating, and the actor fails to make him remotely watchable – and occasionally the script from Wheatley and co-writer Amy Jump presents a nugget of wit. Its 90 minute runtime does feels far longer than it should though, and whilst the warehouse setting could be deemed somewhat restrictive, other features have done more with lesser space and Wheatley, sadly, can’t muster up much of an intricate plot beyond the basic premise; yes, this film is very much just a group of actors shooting at each other – how delightful!

I wanted to enjoy ‘Free Fire’ as some of Wheatley’s previous efforts have been massively effective – his 2011 psychological crime horror outing ‘Kill List’ is immensely powerful – and it’s evident that his (mostly) effective cast are trying their hardest to make the story’s shortcomings as less obvious as they can but, sadly, in his attempt to aim for mainstream success by way of Tarantino trends, Wheatley has delivered an aesthetically stylish but soulfully empty slice of celluloid that tries far too hard for its own good.