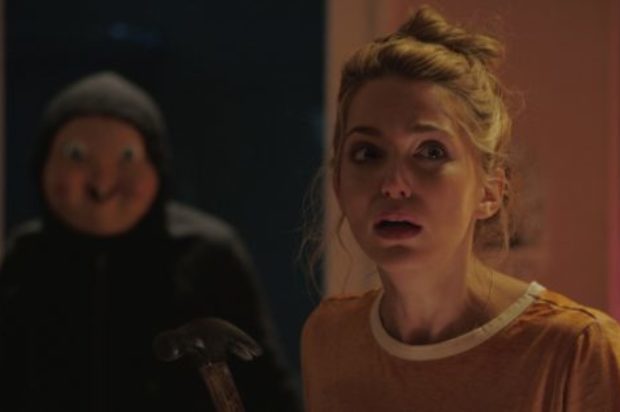 As varying subsets of the horror genre have forged ahead in 2017 as some of the year’s biggest successes (‘Split’, ‘Get Out’ and ‘It’ remain three of the most fruitful ventures), it only makes sense that the slasher genre attempt the resurgence it so desperately deserves. It simply isn’t enough however to let a film coax by on familiarity, especially in the horror field where most audiences are too smart to let the simplicity of a masked killer with a penchant for stalking young females be readily accepted.

How does one rectify this? With a twist of course! If there’s one plot device the horror genre loves it’s a good twist, so ‘Happy Death Day’ arrives armed and ready with a novel premise it wastes little time in showcasing. For college student Tree (Jessica Rothe) – short for Teresa – the day isn’t beginning on the most positive of notes; she arises in a dorm room she has no recollection of entering the previous night. The room’s occupant, and Tree’s supposed bed buddy, is Carter (Israel Broussard), a rather endearing, anti-fraternity type who will play a much more crucial role in her life than she will be expecting.

As she shame-walks to her sorority house, director Christopher B. Landon (‘Scouts Guide to the Zombie Apocalypse’) makes note of specific actions Tree undertakes herself, or witnesses firsthand, seemingly in an attempt to lay the foundation for what Tree needs to do to break the ‘Groundhog Day’ time loop she will find herself in. Reliving the same day over and over is frustrating enough, but for Tree it’s nothing less than a nightmare as each day ends in the same manner – she dies. She awakes the following morning, once again in Carter’s dorm room, to initial confusion, then anger, and finally determination as she concocts (not-so-effective) plans to unmask the weapon-wielding masked psycho that’s murdering her each night.

A mixture of the aforementioned Bill Murray comedy ‘Groundhog Day’ and Wes Craven’s self-aware scarer ‘Scream’, ‘Happy Death Day’ is a breezy, peppy, gore-lite affair that survives mostly on the strength of its own sense of humour. Seldom do we take slasher films seriously, and this film is completely aware of its ridiculousness (though in a lesser manner to the meta ‘Scream’ series) so it has fun in running rampant with a premise that is executed far more successfully than it has any right to be; the normal audience reaction of rolling one’s eyes at Tree asking the inevitable “Who’s there?” as she hears a noise echoing from a dark alley is amusingly subverted.

Of course, when it comes to slasher films the sole reason for watching them tends to boil down to two questions – how inventive will the death sequences be and just who is causing all the carnage? Ironically, ‘Happy Death Day’ doesn’t exactly knock either of these out of the park, but it’s a testament to both Scott Lodbell’s script and Rothe’s sprightly, bitch-induced performance that it manages to overcome these shortcomings. Due to the film’s lower rating (something of a surprise for a slasher) the death scenes are all void of anything bloody, and the ultimate reveal of Tree’s killer is staggering in its stupidity, but when there’s so much fun to be had overall, it’s easy to forgive the feature for dissolving our own expectations of what constitutes a slasher in 2017.