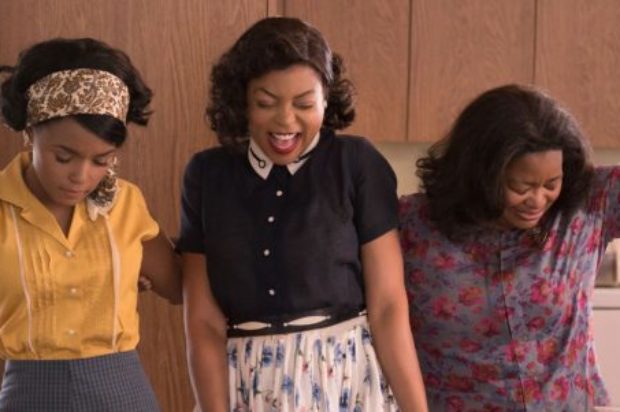 A healthy blend of a fascinating true story with a crowd-pleasing mentality, ‘Hidden Figures’ is an extremely accessible drama buoyed by a trio of finely-tuned performances from leads Tajari P. Henson, Octavia Spencer and Janelle Monae. Though there are aspects of the film’s plot that may be familiar to certain audiences (US astronaut John Glenn’s Earth orbit could ring a few bells) ‘Hidden Figures’ is still very much telling a tale unacquainted to the masses, and given that most astronaut-centric features detail little on those functioning the day-to-day operations, the film succeeds at highlighting the work that goes in to sending these brave men into space; work heralded by African-American women, no less.

In 1960’s Virginia, where racism ran rampant and segregation was imparted in unfathomable proportions, mathematician Katherine Goble (Henson), (unofficial) supervisorial colleague Dorothy Vaughan (Spencer) and aspiring engineer Mary Jackson (Monae) impart their smarts on the relatively ignorant staff at NASA to prove their worth in their respective fields. As their brain-power comes to fruition, the trio of headstrong women additionally have to overcome the institutionalised racism within the NASA compound, which includes bathrooms and eating areas specifically noted for those of “colour”; Henson’s Katherine perhaps experiences the harshest exclusion when she has a coffee pot labelled for her when she goes to work in a near all-male office.

Allowing each woman to have their own fully realised arc proves a massive benefit to the film’s overall sense of achievement, and its lack of melodrama is at once surprising and welcome as it maintains the film’s ‘true story’ mindset; Katherine’s romance with a gentlemanly military man (the always welcome Mahershala Ali) is the closest the film comes to anything overtly schmaltzy. Katherine is perhaps the figure given the most prominence throughout, with a great deal of the film devoted to her math skills being utilised under the guidance of Kevin Costner’s supervisor, whose respect for her encourages him to break down the segregation that plagues the establishment. In a role far removed from the more biting persona showcased in TV’s ‘Empire’, Henson is sublime as Katherine, and the fusion of exposure and grit she demonstrates only further proves her presence on screen is one that should be experienced more often.

Spencer and Monae prove just as good though, the former’s arc focusing on her mastering the very first IBM (the word “computer” being used here as a term to describe the women doing the math as opposed to the machine itself) whilst the latter’s determination in getting her physics degree results in a court case fighting for her right to study at an all-white school. Surprisingly, more well-known personalities like Jim Parsons (Sheldon off TV’s ‘The Big Bang Theory’) as a head engineer and Kirsten Dunst as the ladies’ stern supervisor are left with little to work with beyond their stereotypes, though Glen Powell as John Glenn leaves a welcome impression, portraying the late astronaut in a fitting tribute that highlights his personable nature as he goes out of his way to befriend the African-American women, going so far as to place his complete trust in their judgement come launch day.

Though it’s easy to accuse the film of being a touch too-polished, and the Pharrell Williams-heavy soundtrack adds a certain sense of contemporary commerciality, there’s no taking away the sheer entertainment value of it all. Commendably acted, supremely enjoyable and emotionally effective, ‘Hidden Figures’ is likely to stand as one of 2017’s finest productions.