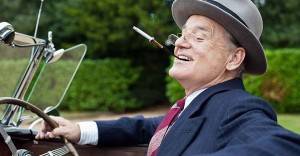 In June 1939, King George VI and his wife, Queen Elizabeth, made a visit to the United States where they stayed with President Franklin D. Roosevelt, and his wife Eleanor, at his country estate in Hyde Park, New York at a time when it was the first instance of a British monarch visiting the US.  With four of the most intriguing beings of the 20th century gathered together, ‘Hyde Park on Hudson’ had an abundance of potential to stage itself as a fascinating biographical piece but somehow manages to play out like a tedious made-for-TV affair despite the talents of its cast and crew.  Might as well as adopt the title of ‘What happens at Hyde park stays at Hyde Park’ as we could certainly do without what we’re offered here.

In the summer of 1939 President Roosevelt (Bill Murray) was spending time at his Hyde Park estate eagerly anticipating the arrival of King George VI (Samuel West) and Queen Elizabeth (Olivia Coleman), hoping to form an alliance between countries which would potentially overthrow Hitler.  In his personal life he was growing close to Margaret “Daisy” Suckle (Laura Linney), his sixth cousin, who would eventually become his mistress.  The relationship that forms between the two seems to happen rather quickly, and with very few words spoken, with the attraction between the two boiling down to their mutual admiration over his stamp collection.  Yep, that’s as interesting as it gets and it’s just as dull as it sounds.  The two embark on lengthy drives together (which leads to an awkward first “intimate” encounter) and continue their seeming inability to communicate as scenes between the two offer little in audio stimulation, and this wouldn’t be such an issue if there was any sort of chemistry brewing between them but Murray and Linney make for a terribly dull pairing.

Adding a bit more life into proceedings is West and Coleman as the aforementioned King and Queen of England who play the fish-out-of-water angle to its most extreme, and come off more like caricatures than characters, but at least they are able to grab your attention.  With the figures played ever so gloriously by Colin Firth and Helena Bonham Carter in 2010’s ‘The King’s Speech’, it’s a little difficult not to compare the performances from West and Coleman respectively, and they don’t equate in the slightest, but the two do the best with what they’re given.  As is the case with Roosevelt’s relationship with Margaret nothing is ever richly explored between the President and the King, and when the film does decide to present us with a tender moment where the two relate to each other over the physical ailments they suffer (FDR having polio and the King with his stutter), it never explores this to its full advantage and falls right back on mediocrity having the fuss over a planned picnic and the choice of serving hotdogs proving more integral to the story than an agreement which saw America come to British aid.

There’s so much wrong with ‘Hyde Park on Hudson’ to the point that it’s frustrating as there is a clear collection of talent involved in a story that could have been so interesting, but practically every avenue explored fails miserably.  The story of the King and Queen doesn’t work because it refuses to move beyond their initial shock of American customs, and FDR’s infidelity even less so as we simply just don’t care.  Laura Linney is a fine actress, but her portrayal of Margaret is terrible; as the viewpoint of the film she offers nothing to hold on to as she plays it with such blankness and her dull, lazy narration doesn’t assist in making her monotonous affair appear any more exciting.  There’s also Olivia Williams as Eleanor, FDR’s wife, who ends up being no more than just a set fixture with the clearly tense relationship between her and Roosevelt barely acknowledged, playing out as if the intricacies of their marriage is common knowledge.

One thing that slightly works is Murray as FDR.  Unusual choice as he may be, he at least is taking a risk with the role and does capture some of his wit, though he never achieves that presence of being in the company of a man that was as powerful as the President was.  A tiny, uneventful film that doesn’t offer the peek behind the curtains it so wants to provide, ‘Hyde Park on Hudson’ is a destination spot best left alone.