Christopher Abbott CINEMA RELEASE: IT COMES AT NIGHT Joel Edgerton by Caroline Russo | on July 4, 2017 | 0 comments | in Film Release & Reviews | Like it 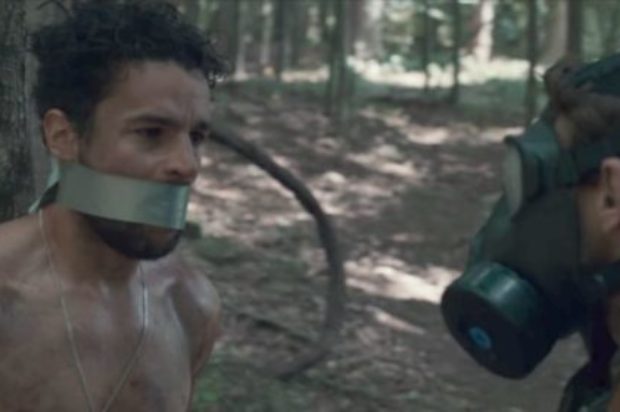 Production company A24 have had their share of success with such heightened genre outings as ‘Ex Machina’ and ‘The Witch’, and a feature like ‘It Comes At Night’ sits comfortably in their wheelhouse given its refusal to play to conventionality. Opting out of cheap thrills and unnecessary gore, ‘It Comes At Night’ instead proves it’s far more sinister to allow its audience to place themselves in the shoes of its characters by illustrating one of the harshest truths of genre cinema – mankind will always be deemed the greatest threat.

Confidently handled by writer/director Terry Edward Shults (his second feature after the arthouse breakout ‘Krisha’), ‘It Comes At Night’ works with a relatively simple premise but presents it in a less traditional manner; in the world presented here, a plague-like illness has swept through the population, and two surviving families are forced to work together, leading the alpha-males of each respective group to constantly be on alert of each other. The family initially earning focus consists of Joel Edgerton’s somewhat-volatile Paul, his wife Sarah (Carmen Ejogo), and their son Travis (Kevin Harrison Jr.). We are introduced to them right in the moment of a family tragedy, and their no-nonsense approach to their situation is greatly offset by the arrival of Will (Christopher Abbott), his loving wife Kim (Riley Keough), and their young son Andrew (Griffin Robert Faulkner), a unit who appear far more bonded and consolidated in the midst of the trouble than Paul’s family.

Less concerned with the horror at hand and more on the balancing act of dominance between Edgerton and Abbott, ‘It Comes At Night’ proves more a showcase of intellect and talent than it does as a film designed to secure audience satisfaction. Both actors are uniformly superb, and despite their prominent billing, there’s never a sense that either’s survival is guaranteed. Ejogo and Keough are equally as good as their wives, and though they receive less material to work with, Keough’s heartbreaking climactic scene in the film may very well be its best. If there’s one person the film belongs to though, it’s Harrison Jr. as Edgerton and Ejogo’s son. His character displays the most compassion out of everyone, and it’s perhaps this trait that makes him just as much of a threat to his own family as his insistence on doing right by everyone could prove the most fatal of downfalls.

Given that the film evokes a feeling that’s more unsettling than straight out horrific, ‘It Comes At Night’ could prove a taxing watch for audiences expecting something more straight forward. This is a slow burn of a film, one Shults laces with an intentional quietness, and though there are moments of haunting imagery throughout – Travis suffers from vivid nightmares – it’s a far more introspective experience.