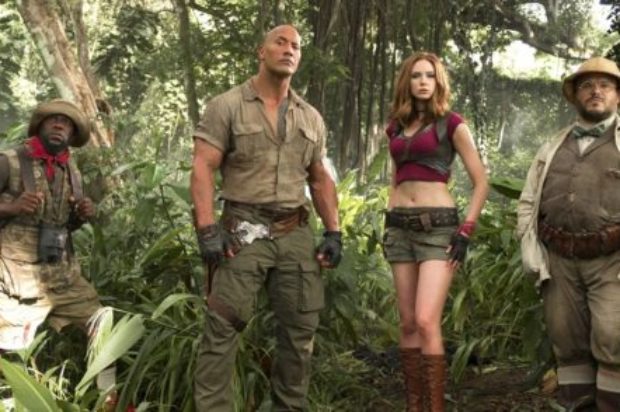 The original ‘Jumanji’ is most likely one of those movies that anyone born in the 1980’s flocked to upon its release in 1995. I was 11 when the Robin Williams-led adventure was unleashed onto the cinema screens, and I distinctly remember being near-immediately obsessed with the feature, marvelling at its (then) impressive special effects and furthering my appreciation for the nuanced comedy stylings of Williams.

As dearly as I held ‘Jumanji’ to my heart, I was never opposed to the idea of a sequel. It could’ve been a messy experience most definitely, and Jack Black and Kevin Hart (and all their comedic “subtlety”) couldn’t begin to match Williams, but co-writer/director Jake Kasdan (‘Bad Teacher’) and lead Dwayne Johnson assured the skeptical masses that this continuation would both honour the original as well as exist as its own product.

Well, the production team here weren’t lying as ‘Jumanji: Welcome to the Jungle’ is indeed a bouncy, well-intentioned adventure outing that works under confident direction and a script that allows its supremely capable cast to play to their individual strengths. The film’s hook of how the ancient boardgame from the original is updated to a gaming system is neat and plausible in a throw-away type of manner, and having the quartet of Johnson, Black, Hart and Karen Gillan portray the avatars of the game for their real-life counterparts is a clever additive that allows each actor to step away from the archetypes they’re primarily known for.

Johnson as the suave archaeologist Smolder Bravestone, the hulking avatar to Alex Wolff’s nerdy Spencer, appears to be having a grand time as he deflates his usual macho image as a young boy unsure how to navigate his new muscular physique. Similarly, Hart, as Bravestone’s weeny weapons valet, earns a lot of mileage out of his tiny stature due to his real-life counterpart being a much taller, and physically fitter, high school jock, whilst Gillan gets a strong showcase as martial artist Ruby Roundhouse, the far more confident avatar to Morgan Turner’s Martha, a shy bookworm whose awkward social skills allow Gillan to flex her impressive comedic flair. Ultimately it’s Black though that steals the film, downplaying his usual shtick and adopting a more endearing personality as the portly cartographer Shelly Oberon, the avatar to Madison Iseman’s vapid Bethany. As a stereotypical hot girl trapped in an overside man’s body, Black has an absolute ball navigating both her disgust and intrigue in her new surroundings; look for the scene where she discovers the joys of being able to urinate standing up.

The plot itself is rather standard in terms of structure (the group have to work together to solve clues and find treasure in order to complete the game and return to their bodies), and the loud, animal-heavy spectacle of the first is swapped out for more heroic-centric action sequences with shoot-outs and vehicular mayhem taking favour; Bobby Cannavale oversees much of the PG-rated carnage as the film’s slithery villain Van Pelt. On the note of its family-friendly rating, as much as young children will be drawn to the film, the scatological humour peppered throughout keeps it from being entirely for the pre-tween crowd.

In line with the original film without tarnishing its legacy, ‘Jumanji: Welcome to the Jungle’ is a rather infectious adventure comedy that benefits from a quick pace, tightly edited action sequences, and a fine sense of humour that all the cast involved confidently deliver.