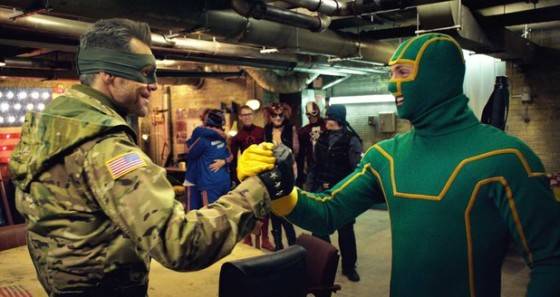 When released in 2010 the original ‘Kick-Ass’ didn’t exactly return the kind of figures that would justify a sequel.  On a $30 million dollar budget it returned $48 million in the United States, sure it’s a profitable number but nothing that would deem a continuation a necessity.  With its worldwide gross and DVD sales taken into account it was a certified $100 million dollar success, and as money is the only language understood in the industry, ‘Kick-Ass 2’ was given the go-ahead.  I thoroughly enjoyed the original film and was all for a part 2 but as we have seen with so many sequels, a furtherance isn’t always an accomplished feat.

Here our titular Kick-Ass (Aaron Taylor-Johnson) or Dave Lizewski as he’s known among his peers, has retired from crime fighting but in the process has inspired a hoard of other regular citizens to dress up like superheroes and serve justice where they see fit.  This new found wave of heroism reignites a fire within Kick-Ass who is hoping he can convince young Mindy Macready (Chloe Grace Moretz) to join him under her moniker of Hit Girl.  With her guardian Marcus (Morris Chestnut) insistent on leaving that side of her life behind to focus on being a regular teenager, it falls on Kick-Ass to once again protect the mean streets which leads him to joining an amateur team of crime-fighters known as Justice Forever.  The group, led by former-Mafia-enforcer-turned-born-again-Christian Colonel Stars and Stripes (Jim Carrey, under a serious dose of prosthetics), are targeted by Red Mist (Christopher Mintz-Plasse) who is seeking to avenge the death of his father, and is now known as The Mother******.

Where the original film felt detailed and creative, ‘Kick-Ass 2’ sadly comes off as cheap and repetitive and whilst no-one can deny the glorification of violence in ‘Kick-Ass’ it somehow seemed organic whereas here it’s presented in an extreme manner to the point that it becomes sickening.  I’m not one to shy away from violence but it just seemed so senseless here, almost as if they were worshipping these disgusting acts, and that’s really where the problem lies with ‘Kick-Ass 2’.  Its content and severity regarding its violence isn’t so much the problem as it is its use.  Trying to evoke laughter from an audience as the characters on screen slash away at each other in a shameless fashion isn’t smart, and no scene plays to this more than when the filmmakers decide that an attempted rape will be highlighted as a sight gag.

At only 100 minutes it’s amazing how tedious ‘Kick-Ass 2’ feels at times as it seems to run out of material quite quickly and opts to recycle themes seen in the first film, such as both Kick-Ass and Hit Girl deciding multiple times whether or not they should take their masks off and leave their lives behind, each time trying to make it a bigger deal than before.  I’m aware Superhero films adopt this ploy, and I have no issue with it but over a handful of times it becomes boring, especially when you know they’re going to put the mask on and fight once again.  Saying this though the sequences involving Mindy’s attempt to normalise herself are undoubtedly the strongest in the film as she experiences her own sexual awakening at the hands of a One Direction type band, falls into a ‘Mean Girls’ type clique, and learns the embarrassment of being an outsider.  These moments are truly where ‘Kick-Ass 2’ shine (perhaps ‘Hit Girl Goes to High School’ should’ve been the adopted title) and it once again highlights Moretz’s strength as an actress.

Following the Sandy Hook Elementary School shooting, an event that took place a month after shooting had begun for the film, Carrey publically withdrew his support for ‘Kick-Ass 2’ saying “…in all good conscience I cannot support that level of violence”.  Whilst he didn’t speak ill of anyone else involved in the film, it’s a decision that seems more than valid now as the horrifying depictions of ‘fun’ violence is clearly what the filmmakers were banking on.  The only “kick-ass” thing about this sequel is Moretz, and it’s a real shame that she may not even be enough to deem this a worthy excursion.