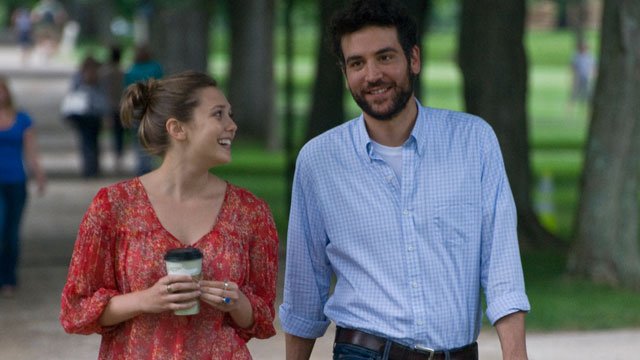 The sophomore directorial effort from Josh Radnor (TV’s ‘How I Met Your Mother’) once again sees him acting under many hats (actor/writer/director) and continuing to mark his niche in the indie film scene. What could’ve been an intelligently preachy narcissistic project, ‘Liberal Arts’, knowingly intellectual as it may be, is an enjoyable and often times honest comedy about college life and where it can lead you.

Radnor plays Jesse Fisher, a 35 year-old college admissions counsellor living in New York. There seems to be a yearning for the idyllic days spent at his own Ohio university, so when he is invited back for the retirement dinner of one of his favourite teachers, Professor Peter Hoberg (Richard Jenkins), he jumps at the chance if only to re-visit the campus he so fondly remembers. At a lunch preceding the celebratory dinner Peter introduces Jesse to Zibby (Elizabeth Olsen), a 19 year-old student with all the pep and smarts that finally seem to be a knowledgeable match for Jesse, who clearly holds his intellect as one of his strongest features. The age gap between the two proves unnerving to Jesse (one amusing scene even depicts him working out the difference in an attempt to convince himself it’s not wrong) but there’s a way to Zibby that makes it hard for him to stay away and so a sort-of romance develops between them.

Initially it appears as if the 16 year age difference won’t cause that much of an issue as a segment in the film where Jesse and Zibby wax poetic about classical music in hand-written letters to each other display the emotional and intellectual connection they have. It’s only when her penchant for trashy vampire novels (a clear dig at the ‘Twilight’ franchise) is revealed that cracks start to show as Jesse refuses to understand how someone so smart can find satisfaction in such a poor excuse for literature. With Jesse sounding over-educated it’s quite evident Radnor has written him to try and be the best possible version of himself, but he plays him so affably that you don’t seem to mind. His boyish looks and self-deprecating charm help us overlook any traits that make his character a little insufferable at times.

But as well-written as Jesse is, or as easily-written as the case may be, Radnor wisely creates the female characters in the film to be just as complex, and never treats them as simple window dressing. Though Zibby has all the qualities of the dream girl one would find in an Indie film, she never becomes a stereotype and Olsen is a big part of that success portraying her with a wide-eyed innocence that never comes off as anything other than sincere, and when called on for her big dramatic moments she appears every bit the college girl she’s playing – wounded, exposed and inexperienced. Elsewhere there’s Allison Janney as one of Jesse’s most influential former teachers, who provides a good portion of the films comic relief and ends up teaching Jesse one more life lesson, and Elizabeth Reaser as Ana, a more age-appropriate love interest possibility for Jesse who, as enchanting as she is, is nothing more than a convenient plot point.

Arguably though it’s Jenkins and lesser-known talent John Magaro who provide the best performances off Radnor’s work; Jenkins portrays the professor in the manner you’d want all college professors to be, and Magaro is oddly touching as a student suffering from a breakdown who finds an odd companion in Jesse. The scenes involving these men are generally the films strongest and it clearly displays the strength and potential Radnor has a writer. Zac Efron is also bizarrely involved as a wisdom-dispensing stoner who may or may not be a figment of Jesse’s imagination, but he comes off more distracting than anything as it’s hard to distance yourself from the fact that it’s Efron.

As Zibby says about her vampire novels – “It’s not Tolstoy, but it’s not television, and that makes me happy”, the same could be said for ‘Liberal Arts’; it’s sweet, well natured and cleverly written enough to forgiven any pretention it may display.

My rating 4/5 (A welcome surprise)