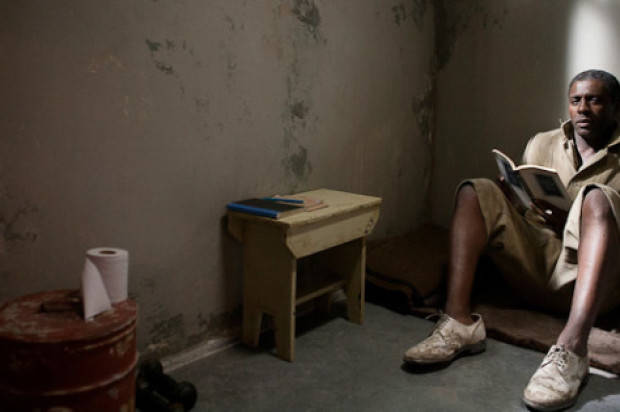 CINEMA RELEASE: MANDELA: LONG WALK TO FREEDOM
Release date: 6th February 2014
Director: Justin Chadwick
Cast: Idris Elba, Naomie Harris
Classification: M (Mature Themes, Violence and Coarse Language)
Review by Peter Gray
Making a film that truly encapsulates the remarkable life of Nelson Mandela was always going to be a hard task, and though ‘Mandela: Long Walk to Freedom’ is a serviceable enough outing, it still falls short of being the revelatory biopic it should be. Based on Mandela’s autobiography ‘Long Walk to Freedom’, Justin Chadwick’s film hopes to create a three-dimensional portrait of the man but in attempting to do so a great deal of poignancy is missing, and with a life that is so full of immense moments it wants to include as much as possible yet it somehow plays on fast forward.
The early moments of the film paint a youthful Mandela (Idris Elba) as a serial womanizer, cheating on his first wife without so much as batting an eyelid, as well as relatively reluctant to join the ANC (African National Congress) as he seems to enjoy his profession of being a lawyer, even if he has to constantly deal with racist taunts and condescension from the ruling minority. When he meets the young and spirited Winnie Madikizela (Naomie Harris), Mandela’s life took a turn as his passion for righting the wrongs in South Africa, particularly racial segregation, became his focus and what ultimately lead to his 27 years in jail. When the film shifts to his imprisonment ‘Long Walk to Freedom’ shows signs of being a worthy story as the initial scenes of Mandela and Winnie falling in love come off as rather superficial, and more ‘Hallmark’ than heartfelt, and at over 2 hours (and it’s unfortunately a movie where you feel the running time) the lesser time spent on romantic fluff the better.
Whatever the reaction to the story, the one factor that remains undeniable is Elba’s stunning portrayal of Mandela. The actor has always been particularly gifted with accents, and his mannerisms and vocal work here are stunning with the actor effortlessly embodying the figure in both his younger, more physical years (where Mandela dabbled in boxing) and as an older, slightly more fragile man. Though he doesn’t look exactly like Mandela, his performance is good enough to get lost inside. With her role in fighting against segregation, Winnie became a controversial figure in her own right, and Harris appears ready for the task of taking her on. Celebrated by some and demonized by others, Winnie was a divergent figure and the film does a commendable job of balancing her as equally and as honestly as they could. Though she is clearly consumed by hatred more than her husband, Harris’ performance never panders to simplicity and the shift from principled youth to volatile determination is believable. Winnie’s actions are never excused, but you at least get an understanding of where she’s coming from and Harris helps convey that.
A film can’t survive on just good performances though and outside of two solid turns, ‘Long Walk to Freedom’ treads on a flat surface. Mandela’s story is nothing short of amazing but this film doesn’t come close to truly conveying it, coming across more like a condensed mini-series than a full-fledged feature. There have been better films detailing his life, and I think there is perhaps another great biopic still to be made about the man but as it stands ‘Mandela: Long Walk to Freedom’ is a better read than it is a visual.
My rating 3.5/5 (Elba’s performance worth the travel)