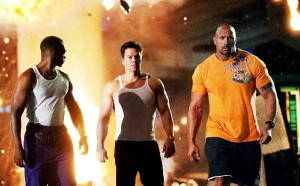 They say that truth is stranger than fiction, and in the case of ‘Pain and Gain’ it’s a sentence that couldn’t ring any more actuality.  While I’m certain that director Michael Bay and his cohorts took liberties with the story they were working with, this is still something that happened – dismembered body parts and all.  Bay has never been a subtle director and even though he’s working with a smaller budget than he’s had in the last few years, his typical over-the-top style is still in full force – something that feels like a perfect fit with the kinetic energy and bad taste this film exudes.

Packed to the brim with torture, violence, drug use and general nastiness, ‘Pain and Gain’ focuses on bodybuilder, and Miami gym trainer, Daniel Lugo (Mark Wahlberg) who, after viewing an inspirational talk from self-help guru Johnny Wu (Ken Jeong), decides he wants more from his life.  Enlisting the help of fellow bodybuilder Adrian Doorbal (Anthony Mackie) and Jesus loving born again thug Paul Doyle (Dwayne Johnson), he plans on kidnapping Victor Kershaw (Tony Shalhoub), a wealthy and immoral client, with the intention of fleecing him out of all of his assets.  It’s an ill-conceived plan to say the least but initially it appears to of worked.  Eliciting sympathy for any party involved is a tough ask, though thankfully it’s never initiated, with all three muscle men and their victims (yes it goes beyond Victor) all vastly unlikeable people, and given that we are asked to stay with this crew for the overly long running time (at over 2 hours it becomes a bit of a task), it becomes more and more of a challenge to find any redeeming qualities.  Johnson’s Paul Doyle perhaps comes the closest to evoking any sort of emotional reaction from the audience as he is completely aware what he is doing is wrong but can never bring himself to showcase a backbone, and Johnson’s performance is truly the standout as there’s something fascinating in watching a man as strong and as imposing as he is hindering away like a coward.

Wahlberg and Mackie provide suitable performances, Shalhoub is very effective as the “villain”, and smaller roles from Ed Harris, Rob Corddry and the always enjoyable Rebel Wilson round out a cast that is far more impressive than a film of this ilk deserves, but all of that isn’t enough to save it from itself, especially when the film sets up another scheme for the trio to attempt sending ‘Pain and Gain’ to immensely overstay its welcome.  It’s also in this section of the film that the violence quota is upped and if it wasn’t already a tonally unpleasant film, it officially makes it mark here.  Structurally it hurts the film too as so much time is spent setting the preliminary crime up and introducing us to these sordid characters that the last half hour seems rushed and thus lessens its impact.

The true crime element adopted here is interesting, and I don’t think Michael Bay was the wrong choice for a director as this outlandish, violent tale is nothing he can’t handle, but the choice to try and blend this dark, sordid affair with Bay’s typical technical approach (I’m looking at you slow motion shots) fails and attempts to inject humour into some truly dark sequences present themselves in an uneasy fashion.  It really is a shame that ‘Pain and Gain’ is such an unpleasant experience as the elements feel like they should work but unfortunately Bay’s vision is saturated in viciousness.