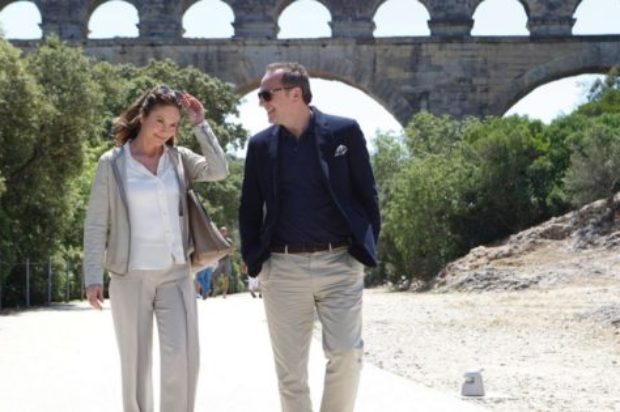 Despite the impressive filmmaking pedigree that surrounds her, Eleanor Coppola (mother of Sofia, and wife to Francis Ford) doesn’t exactly show much flare for quality or depth in ‘Paris Can Wait’. It’s a nice-looking film, and the central performance from Diane Lane is as warm as one would expect – and, quite frankly, the only reason this film stays afloat – but there’s a certain emptiness on hand here that ultimately can’t be filled by the richness of French cuisine that Coppola feels so compelled to highlight.

Beginning at the Cannes Film Festival where she is little more than an accessory to her filmmaker husband (Alec Baldwin, whose appearance in the film adds to little more than an extended cameo), Anne (Lane) is relegated to further passenger status when an ear ache forces her to skip the flight to Paris, leading her husband’s business associate, the very French Jacques (Arnaud Viard), to offer to drive her instead. Though the film does its best to paint Anne as unsure in her marriage, and you can imagine in any other feature her husband would be painted as so horrible that you wait patiently for Anne and Jacques to fall madly in love with one another, the truth is that he isn’t that bad of a guy (perhaps just a little less attentive as he should be) and Jacque’s incessant knowledge of all-things French tends to grate more than it endears, leaving the film with very little substance and the misplaced confidence that it can substitute this with style.

There’s no denying that in the initial stages of the film the imagery onslaught of fine cuisine and countryside attractions are appealing, but as the film winds on it becomes increasingly evident that Coppola’s script has nothing to offer beyond sumptuous visuals. And when the characters are given a hint of gravity, the film opts to gloss over the drama believing another pompous anecdote from Jacques will satisfy; Anne talks of losing her infant son, he follows this up with a romantic dinner – makes sense?

Arguably the romantic comedy genre as of late has been excelling due to filmmakers refusing to talk down to audiences and saturate the market with sugary sweetness, so perhaps that is why ‘Paris Can Wait’ appears as even less of a product. There’s nothing wrong with harmless cinema, and any excuse to see Diane Lane on the big screen is welcome, but even if we accepted the bar being set low for this Parisian excursion we’d still reach for the surface.