What a wonderful little surprise ‘Pitch Perfect’ turned out to be.  Coming across like a big screen version of TV’s ‘Glee’, except with more sex jokes and sight gags, this musical comedy isn’t your typical sing-song feature and it’s all the better for it.  It’s quite chipper and doesn’t push too many boundaries but it’s consistently funny and far more entertaining than it has any right to be. 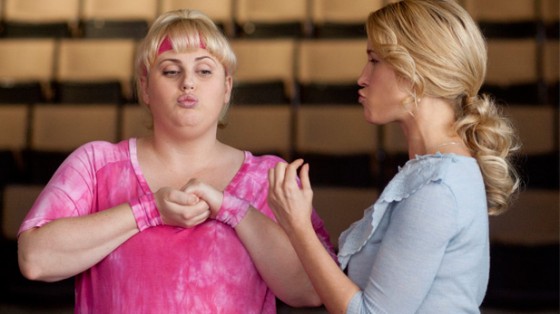 Much like the plethora of dance oriented films we have seen thrust on screen in the last few years where the characters serve each other by breaking out perfectly choreographed sequences, the hoards of performers in ‘Pitch Perfect’ sing at each other in order to show their competition up.  It’s an odd reality but you don’t see something like this for realism, and it indeed helps that the accompanying soundtrack is highly appealing.

As is the case with most of these films our lead character is somewhat of an outsider, so our lead teen Beca (Anna Kendrick) is perfect fodder with her refusal to conform to the norm and teacher father always on her about getting a real job as her dreams lie in being a DJ (a plot point that predictably comes into motion in the flicks latter half).  The university she is attending seems to be the hub of instrument-free talent as everywhere she goes there are a number of acapella groups voicing their talents with a male troupe known as the Treblemakers proving the school’s biggest coo.  Their lead singer is the insufferable man-child Bumper (Adam Devine) and right from the get-go it’s evident he has it in for the Bellas, an all-girl group that are essentially the female counterpart to the Treblemakers – minus the success.  The Bellas are desperate to overhaul their image following their last trip to finals where icy leader Aubrey (Anna Camp) had an unfortunate on-stage ‘accident’, and so when Aubrey’s right-hand bella Chloe (Brittany Snow) hears Beca belting out a tune in the shower, we all know who the new member will be.  And to add that extra bit of juice Beca and new Treblemaker recruit Jesse (Skylar Astin) have a little bit of a thing for each other, a big no-no (or aca-no-no as it would be said here) in singing circles, and as much as they can fight their attraction we know where things will inevitably lead.

When it isn’t taking us down its formulaic path ‘Pitch Perfect’ is providing more than enough ample entertainment when its singing sequences are on full display.  The mashing of songs old and new isn’t a new concept but presented here it seems rather fresh and I trust there’ll be more than a few people in the audience that will have the soundtrack stuck in their heads long after the screening is over (‘I Saw the Sign’ by Ace of Base most likely to be the main culprit).  In addition to the music and the surprising additive of vomit sight gags (complete with a ‘snow angel’ made from the projection), the real winner is the cast and the odd bouts of humour injected into the script.  Kendrick has secured herself as one of her generations most talented performers (hard to believe she started out as a support player in ‘Twilight’) and there’s a radiance to her that makes her effortlessly likeable, and, as generic as they are, Snow and Camp are at ease in their respective roles.  But it’s our own Rebel Wilson that emerges the brightest as the self-proclaimed ‘Fat Amy’ (so ‘twig bitches’ don’t call her it behind her back), dishing out an array of contemptuous one-liners and retorts that easily put her as the films funniest performer; her rejection to Bumper’s come-on line relaying it to turning down the chance to do crystal meth is one of her many winners.

As a 27 year-old male I know I’m not the target audience for ‘Pitch Perfect’ but I’m not above films of this nature, and whether it was because I didn’t know what to expect or I’m a sucker for a sing along, this truly proved to be a worthy experience.  I laughed, I sang, I danced in my seat – I was thoroughly pitch slapped! And loved every minute.