JUNGLE MARGIE ROBBIE Planet of the Apes Tazan by Caroline Russo | on July 7, 2016 | 0 comments | in Film Release & Reviews | Like it 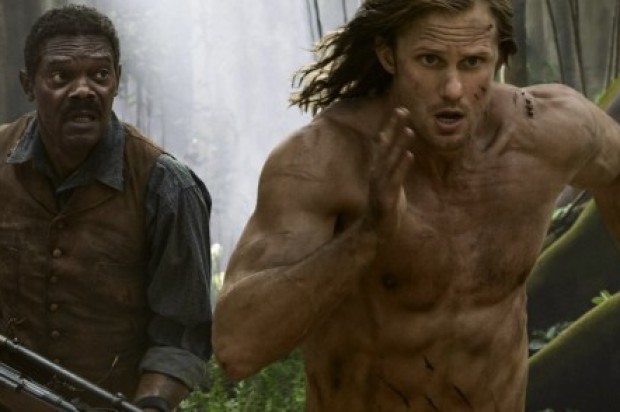 CINEMA RELEASE: THE LEGEND OF TARZAN

Edgar Rice Burroughs’ heroic jungle creation Tarzan hasn’t had the most consistent run in his cinematic form. For every well received Christopher Lambert portrayal (1984’s Oscar-nominated ‘Greystoke: The Legend of Tarzan, Lord of the Apes’) there was a Casper Van Dien turn to counter-balance (1998’s flop ‘Tarzan and the Lost City’), leaving 1999’s animated Disney take as arguably the last great adaptation of everyone’s favourite loinclothed vine swinger. Hoping that today’s audiences were craving a new take on the classic character, Warner Bros. have pumped a hefty amount of change into director David Yates’ (‘Harry Potter and the Deathly Hallows’ parts 1 & 2) vision, banking that a potential franchise will be born from the attractive package that is ‘The Legend of Tarzan’.

Attempting to ground the character in somewhat of a reality, Tarzan (Alexander Skarsgard) – preferring here to be known as his more aristocratic alter-ego John Clayton – resides as simply as possible in 19th century England alongside devoted wife Jane (Margot Robbie, captivating as usual). Looking to present us with more than your run-of-the-mill origin story, Yates switches back and forth in the timeline as sequences of Tarzan’s youth and his first meeting with young Jane are interspersed with their current existence where they are called back to the jungle they once knew to investigate the chatter that the Belgian government is engaging in the slave trade.

As interesting and in-depth as that sounds, ‘The Legend of Tarzan’ is essentially a fluffy adventure film that unfortunately doesn’t overcome its basic components. Skarsgard is perfectly acceptable in the lead role though, even though the performance itself never matches the impressiveness that is his 8-packed physique, and Robbie makes for a wonderfully liberated Jane, and such is the charisma of the Australian actress the film feels better when she is on-screen; a tad ironic for a film about Tarzan. The support from Samuel L. Jackson and Christoph Waltz is less convincing, with Waltz’s smarmy villain almost feeling like a parody of the darker characters he’s portrayed in other, better films; surely Hollywood can find the clearly talented actor better roles. Jackson is the token comedic sidekick, and it’s played as well as it can be even if his whole character is suitably unnecessary.

Additionally for a project armed with such a substantial budget, the CG work doesn’t appear entirely seamless, especially in comparison to such films as the recent ‘Planet of the Apes’ offerings or this year’s ‘The Jungle Book’. And though director Yates is no stranger to the adventure genre, he doesn’t seem certain of himself as an action director with Tarzan’s hand-to-hand combat scenes feeling particularly lifeless; it also doesn’t help matters that the director feels compelled to break momentum when any sign of a genuinely exciting action sequence is upon us by splicing in a flashback.

‘The Legend of Tarzan’ sadly underwhelms with a story that tries to cover too many bases at once. It’s evident there’s a decent film somewhere amongst what ultimately transpires on-screen, it’s just a shame all the ingredients didn’t come together cohesively enough to deliver a tale worthy of the efforts Skarsgard and Robbie deliver.