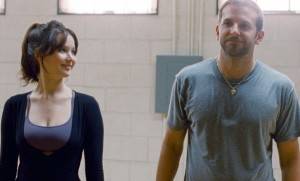 ‘Silver Linings Playbook’ has been nominated for 8 Academy Awards at this year’s ceremony, and is the first film in 31 years to receive nominations in all four acting categories.  With all the accolades and positive word I had heard prior to seeing the film my hopes were understandably high, and there was so much about this film that lead me to believe I would thoroughly enjoy it.  Sadly this wasn’t the case upon exiting the cinema.  Expectations can be the killer for a film if you hype it up to be something it’s not, and this is perhaps one of the main reasons I didn’t connect with ‘Silver Linings…’ the way I expected to.  Advertised as a somewhat generic romantic comedy, this playbook is much deeper (and darker) than that, at least in the initial stages.

Bradley Cooper stars as Pat, a high school history teacher who is fresh out of a mental institution after an 8 month stay following a breakdown that resulted in him being diagnosed with bi-polar disorder.  Witnessing firsthand the infidelity of his wife is what triggered his psychological collapse, but with his release he’s hoping to prove his new status as a changed man and step right back into the relationship as if nothing happened.  At home it’s evident that Pat isn’t the only member of his family suffering as his father (Robert DeNiro) displays indications of obsessive compulsive disorder and there’s a clear divide between the two generations that neither seem intent on fixing.  As he frantically reads the syllabus he believes his educator wife will be teaching in her class (resulting in another episode) in-between his constant neighbourhood jogs Pat eventually crosses paths with Tiffany (Jennifer Lawrence), another seemingly damaged soul who is reeling at the loss of her husband Tommy and in her mourning has acted out in such a manner that has resulted in a less than glowing reputation amongst the neighbourhood.  The two’s first meeting is laced with tension and it doesn’t take long for a bond to form between the two; a casual conversation over dinner as to what medication they are or were on proving the icebreaker.

Comedies using mental illness as its underlying current is not a new concept but when handled correctly can be highly effective, and initially it appears as if this film will revel in its dark nature.  As uncomfortable as the scenes are where Pat starts to lose his grip on sanity, they are at least stemming from a real place and it helps that Cooper plays the part with utter sincerity, never once succumbing to a stereotype.  Equally as good, if not better, is Lawrence who dominates the screen with her presence as Tiffany.  If it wasn’t for these two I don’t know how much of a film ‘Silver Linings…’ would be as this is truly a case of performances making the movie, and the duo, who have both been rightfully awarded Oscar nominations, keep proceedings afloat as the script and story dwindle into tedious mediocrity.  As the film introduces a dance contest as a way of Pat and Tiffany to learn how to trust each other, writer/director David O. Russell oddly inches the film closer towards the romantic comedy mentality it advertises itself as.  I have nothing against romcoms, and Cooper and Lawrence have copious amounts of chemistry between them despite their 15 year age difference, but I think I would’ve appreciated the film more had it stuck to its guns and remained the quirky, darker comedy it started out as instead of trying to win us all over with its overly sappy conclusion.

With all the love the film has received I am aware I’m in the minority of people who haven’t warmed to it as much, and it’s not so much a case of disliking the film as it is feeling frustrated by its disjunction as there is a solid story to be told and the aforementioned performances of Cooper, finally solidifying himself as an actor, and Lawrence are just too good to miss out on.  The same can’t be said for DeNiro who sadly does very little, and Australia’s own Jacki Weaver who manages even less (how she managed to earn an Oscar nomination for Best Supporting Actress is beyond me as she does little more than look doe-eyed and concerned) but if you’re happy to play into the films ultimate predictable formula you most likely won’t be too concerned.