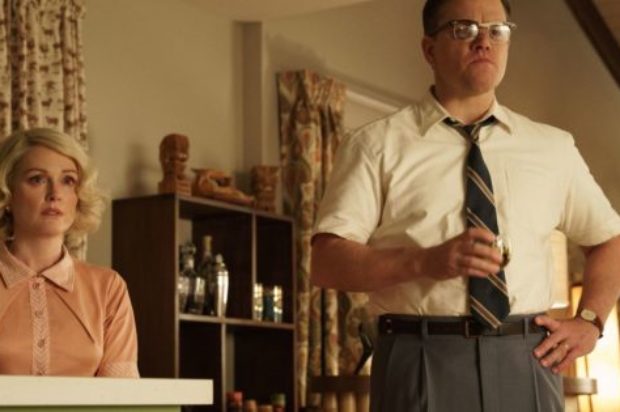 Outside of a few inspired moments of lunacy, ‘Suburbicon’ is a disappointing attempt at satire that never commits itself fully to the potential at hand. A black comedy written by the Coen brothers under the direction of George Clooney, this is a film that is no short supply of reliable talent, yet the way it presents itself on screen is akin to a filmmaker seemingly unsure how to handle their material.

A handsome product on a visual level, with a crisp 1950’s aesthetic that Clooney successfully executes, ‘Suburbicon’ proves a nasty film underneath the surface with Matt Damon’s working class family man, Gardner Lodge, having his life thrown into considerable turmoil when a home invasion one evening turns fatal for his wheelchair-bound wife (Julianne Moore). Given that she’s the only casualty, and Gardner and his sister-in-law (also played by Moore) appear a little too close following her demise, it isn’t entirely surprising that foul play is involved, and when an insurance claims adjuster (Oscar Isaac) comes snooping, the film feels like it may finally pick up its energy and come through to deliver on expectation.

As the running time passes and both the social satire aspect and murder mystery plot underwhelm, Clooney’s decision to include another story strand in the form of racial commentary hopes to act as a saviour, but again falls flat with a should-be important plot point that ultimately is only there for the sake of convenience during the violent, unhinged finale; a black family move into the white-heavy neighbourhood which gradually sends the town folk into a rage that culminates in a riot. Had Clooney and the Coen’s opted to focus on either solely on the murder plot or the plight of the African American family surviving through racial prejudice, ‘Suburbicon’ could have been something of worth, but there’s a distinct sloppiness in the back-and-forth between the two stories that leaves the audience with little care for either.

As for what does work in ‘Suburbicon’, well its predominantly the cast, with Isaac prevailing as the film’s brightest spot (despite his essential extended cameo status) and both Damon and Moore bringing some gravitas to their roles, even if their characters are more caricatures than fully realised creations. Perhaps a film that read differently on the page than how it translated on screen, ‘Suburbicon’ can’t help but feel like one of the year’s biggest disappointments given all the talent involved. Best steer clear and let your GPS guide you to another cinematic destination.