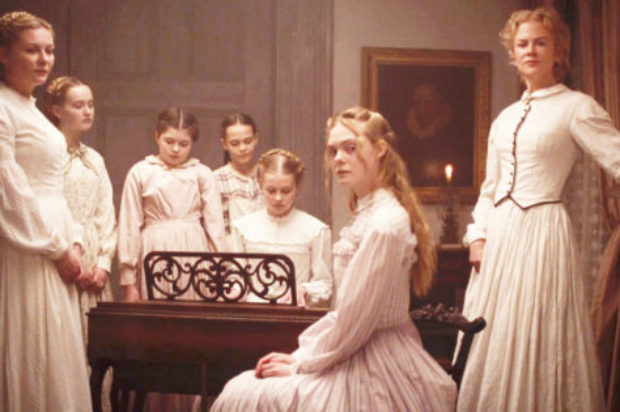 Not having seen the 1971 original, headlined by Clint Eastwood in one of his numerous collaborations with director Don Siegel, I entered ‘The Beguiled’ with no preconceptions.  I knew it was a feminist take on the original material, and that the character played by Eastwood was re-envisioned as less of a victim in the form of Colin Farrell, but ultimately Sofia Coppola’s dark drama proved a fresh cinematic experience, one I was delighted to blindly endure.

A slow-burn of a film that takes its time to acquaint the audience with the female residents of a Virginia-set seminary during the Civil War, Coppola’s vision proves very much to be disinterested in the racial aspect the story could address – the film is distinctly lacking in any characters of colour – and instead tackles the roles of white Southern women who have been raised in a proper, God-fearing manner, whilst simultaneously forced to live something of a sheltered existence.

Despite the trailers alluding to a film bathed in obvious menace, ‘The Beguiled’ is a far more subtle experience. When we first meet Farrell’s Corporal John McBurney he’s injured and deserted the battlefield. Young student Amy (Oona Laurence) takes pity on him and escorts him back to the near-abandoned school she resides in under the stern care of Miss Martha Farnsworth (Nicole Kidman).

McBurney’s presence stirs a series of emotions in the various women of the household, with Martha clearly suffering the most due to her own repressed sexuality (an early sequence where she bathes an unconscious Farrell is played out wonderfully through its own delicacy), whilst Kirsten Dunst’s head teacher Edwina Morrow and Elle Fanning’s more liberated student Alicia appear more forthcoming with their interest in the roguish soldier.

Though the film does a wonderful job at hinting at Fanning’s Lolita-like mentality, Coppola keeps the primary focus on Farrell and his push-pull relationships with both Kidman and Dunst; both actresses uniformly brilliant in their roles. Farrell succeeds at evoking sympathy from the audience due to the tribulations he experiences throughout, but his palpable sense of menace is always brewing under the surface, and when the film paints him so clearly as the villain, we applaud the film’s reasoning when it opts to suggest the women of the school retaliate in a sinister manner.

Though it runs at a brisk 94 minutes, ‘The Beguiled’ never appears overly hurried, and impatient viewers may tire of its antics; it isn’t until at least halfway through proceedings that the film feels like it’s leading somewhere of interest. As well, the natural light used throughout lends itself to a dark and murky outcome that doesn’t appear the most attractive in a cinema setting, leading this to be one of the rare titles that will benefit from a home viewing screen; a real shame when the settings and costumes appear so deliberate and exquisite.

Whilst ‘The Beguiled’ is ultimately a film that’s more likely to be appreciated than enjoyed, the consistent performances, surprising touches of dark comedy (Kidman’s asking of an anatomy book during a crucial moment is sublime) and its overall unapologetic nature earn the feature viewing rights for audiences prepared to watch something far more unexpected than what the advertisements would have you believe.