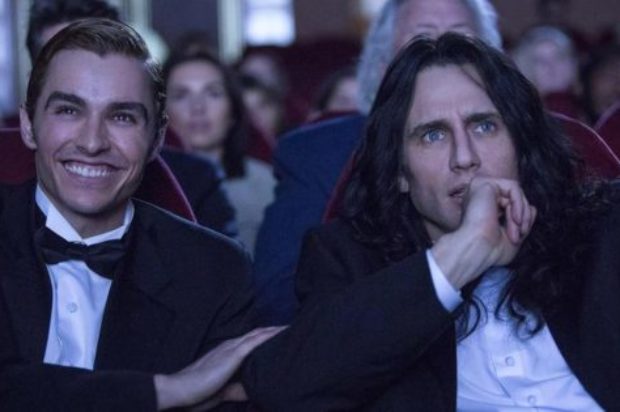 Tommy Wiseau’s inexplicable 2003 opus ‘The Room’ is surely a film unlike any other you’ve experienced. Vanity projects aren’t a niche form of medium, and the easy accessibility nowadays means many a misguided project are at the ready to be unleashed on unsuspecting audiences, but ‘The Room’, magnificently bad as it is, is in a class all of its own.

Dubbed the “‘Citizen Kane’ of bad movies”, ‘The Room’ is a misguided, disjointed “drama” that has since earned cult status as a product that’s so bad it’s good, and viewing the film in the manner that Wiseau intended it becomes increasingly easy to see as to why an actor like James Franco would align himself with this film in some capacity. Franco’s career has always fluctuated between A-list mentality and performance art fascination, and it isn’t difficult to see why he would have some sort of kinship with Wiseau.

‘The Disaster Artist’, based on the non-fiction account of the same name written by ‘The Room’ actor Greg Sestero, is very much a love letter to both the enigmatic Wiseau and the craft of filmmaking itself. And whilst it helps to have seen ‘The Room’, or at the very least be familiar with its reputation, Franco has crafted such a film that there’s no less enjoyment should you enter blindly; the recreation of several of the original film’s infamous sequences are uncanny, and Franco’s decision to compare them side-by-side during the end credits allows fresh viewers a further insight into the madness.

Whilst much of ‘The Disaster Artist’ is dedicated to Wiseau’s remarkable ineptitude in how to both make and manage a feature film, Franco never relegates him to a caricature. He’s funny, but unintentionally so in a way that feels organic to the real Wiseau’s aesthetic. Franco has also maintained the sense of mystery that surrounds him as Sestero (played in the film by James’s brother Dave Franco) pointed out in his book that Wiseau’s age, nationality, and ability to fund a $6 million feature remains unknown to this very day, and ‘The Disaster Artist’ resists the urge to glamourise the unknown.

With his lazy eye and thick, often nondescript, European accent, Wiseau is too-easy a character to lampoon, but the vulnerability Franco injects behind said lazy eye elevates the film from comedy to poignancy. Similarly, the plethora of talent on board who are all expertly cast as their equally misguided actor counterparts resist the urge to play them as anything other than true, devoted thespians; Jacki Weaver, Ari Graynor, and Josh Hutcherson are superb in their support roles as some of ‘The Room’’s main cast members, whilst Zac Efron makes for a neat cameo as a throwaway bit-player who takes his craft very seriously. Seth Rogen and Paul Scheer round out the main cast, both playing it rather straight as the respective script supervisor and cinematographer who have their patience tested on a daily basis through Wiseau’s mishandled entitlement on set.

‘The Room’ is not the first unremarkable film to rise from the ashes of its own defeat, nor will it likely be the last, but it’s definitely one of the exceptions. Wiseau has finally earned the appraisal he so desperately craved with his “disasterpiece” maintaining the kind of longevity some filmmakers only dream of, whilst Franco, whose directorial efforts until now have largely gone overlooked, has crafted his finest work as both an actor and a filmmaker with a project that celebrates the silver linings of tragedy.