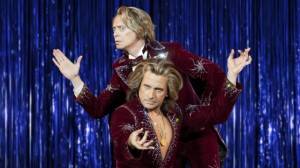 Hoping to be to magic what ‘Anchorman’ was to news broadcasting and ‘Zoolander’ was to male models, ‘The Incredible Burt Wonderstone’ is a comedy that unfortunately falls short with its premise but is ultimately somewhat enjoyable thanks to the unlikely charm brought about by its performers.  A feature starring Steve Carell and Jim Carrey as rival magicians seems like perfect fodder for comedic gold, and there’s no denying the two give their all, but it’s all very by-the-numbers with its plot and many of the sequences feel like they could be funnier, but again whatever shortcomings the script may have are made up for with a cast that manage to make the whole affair seem somewhat embraceable.

The titular Burt Wonderstone (Carell) is a boastful, obnoxious, self-indulgent Vegas magician who, along with his childhood friend and now performing partner Anton Marvelton (Steve Buscemi), has made the city of sin his adult playground for the better part of a decade, despite his show rehashing the same routine night after night.  The show has afforded him the finer things in life, like an over-sized bed he has self-dubbed ‘the largest in Vegas’, and so he’s blind to the fact that his act has turned stale.  The arrival of street performer, or “brain rapist” as he calls himself, Steve Gray (Carrey) leads Burt and Anton to pay attention to the so-called future of magic, even though they are both disgusted at his “magic” acts; holding his own urine for a week and sleeping on a hot bed of coals being the less extreme extent of his abilities.

From here on out the film follows a rather predictable path with Burt and Anton having a falling out (leading to a particularly amusing tangent where Anton hopes to bring magic to third world countries as opposed to food and water), their unwilling assistant (Olivia Wilde) quitting and setting up employment with the competition, and the old-timey magician (Alan Arkin) that was so influential in Burt’s magician dreams as a child entering his life to help him find that magic again.  It’s all so expected, and we know where it’s going to head back to, but each player here is likeable enough, or in Carrey’s case entertaining enough, that we are happy to sit through it because every now and then they throw a curve ball and provide a joke or sight gag that’s completely unexpected and genuinely funny.

With his tan too orange, hair too bouffant, and ego too large, it’s too easy to dislike the Burt Wonderstone character but Carell makes it work so that all his annoyances as a character are more humorous than anything else and you kind of end up being somewhat drawn to him; Of course your gravitation towards him, and the whole film in general, will depend on how much you appreciate Carell as a performer.  Buscemi has it easier as the character of Anton is more likeable from the get-go, and though Buscemi has little to do, he brings his usual quirkiness to the role that makes him all the more endearing.  Support wise Wilde continues to bring a sense of approachability to her role, and though initially it seems like she’ll be mere window dressing, the script opts to throw a little magic her way, and Arkin has a handful of scene-stealing moments as a former magician who still has a few tricks left to dish out; his “disappearing act” from a hospital bed being principally amusing.  As for Carrey, well I’ll admit I was hesitant as the actor has a tendency to go too far over-the-top – and his character is perfectly suited for that – but thankfully he manages to show some restraint.  Sure he’s burning children’s names into his arm and cutting his own cheek open to extract a playing card, but it oddly doesn’t come across as insufferable as it could have, and it’s clear he’s having fun with the opportunity to perform a bit more of his full-on schtick after laying low in more child-friendly affairs over the last few years.

‘The Incredible Burt Wonderstone’ doesn’t live up to its title in any way, shape or form, it’s formulaic to a tee and you’re not missing out on anything if you don’t see it, but for what it is, it’s enjoyable.  I was consistently smiling or chuckling the whole way through, and though I wasn’t hypnotised by the magic, it did a reasonable enough job of giving off the illusion of being funny.