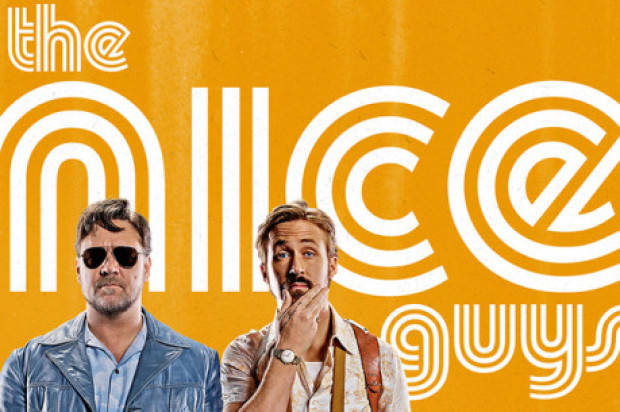 Free of CGI-heavy effects, superhero doom and gloom, and end-of-the-world destruction, ‘The Nice Guys’ is an affectionate throwback to the commercial buddy films of yesteryear that sit plentiful in writer/director Shane Black’s wheelhouse. Bringing to mind Black’s directorial debut ‘Kiss, Kiss, Bang, Bang’ (a grand comedy noir if ever there was one) ‘The Nice Guys’ plays within the same guidelines albeit with obvious big-studio fluffing.

Exploiting Black’s panache for crafting chemistry out of the most unlikely of pairs, ‘The Nice Guys’ utilises Russell Crowe and Ryan Gosling to the most brilliant effect with each actor appearing at ease in their respective roles as a duo of investigators – one a hired enforcer (Crowe), the other a down-on-his-luck private eye (Gosling) – who are hired by a district attorney (Kim Basinger) to help find her runaway daughter whose disappearance may be tied to the mysterious death of a famous adult film star. What initially appears to be somewhat of an elaborate plotline quickly becomes a snappy whodunit with Black’s witty dialogue charging through at any given opportunity.

As burly bone-breaker Jackson Healy, Crowe is in top-form as the type of muscle who uses his distinct ability to inflict pain with the least amount of effort required. Though you wouldn’t go as so far as to say he has a heart-of-gold, he certainly abides by a moral code which earns him the nice guy moniker. In complete contrast, Gosling’s Holland March is prone to panic attacks and weeping and cowering in the face of danger but somehow (seemingly by accident more often than not) he gets the job done. Together the two are a comic delight (Gosling’s facial expressions and high-pitched squeals are gold) and it’s evident how much fun they are having playing something so broad.

Where the film also impresses is with the casting of young Australian actress Angourie Rice (last seen in ‘The Final Hours’) as Gosling’s far-from-typical pre-teen daughter who emerges as the film’s full-blown third-lead, downplaying any fears audiences might have at this being an overblown testosterone fest. In a similar vein to how integral Rene Russo became to the pairing of Mel Gibson and Danny Glover in the ‘Lethal Weapon’ series (another title in Black’s back-catalogue), Rice’s Holly March becomes an active participant in the solving of this bizarre murder case. Perhaps it’s in the casting of the villains where ‘The Nice Guys’ showcases a rare misstep as they aren’t nearly as menacing as they should be. Despite effective casting in Keith David and Matt Bomer (another actor playing against type), they never blossom to be identities that prove formidable assets against Crowe and Gosling; the whodunit aspect does mean that the criminal minds behind the operation aren’t apparent until towards the end of the film so it ultimately isn’t as a big a flaw.

That slight hiccup aside ‘The Nice Guys’ is pretty flawless in terms of big-screen entertainment. It’s 1970’s setting proves the perfect backdrop to a retro action/comedy that is filled to the brim with franchise opportunities. The old saying is that nice guys finish last but this deliriously entertaining romp proves that every so often they can come out on top.