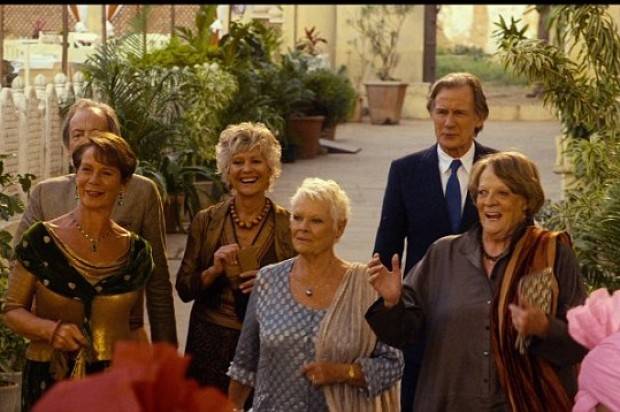 A witty reviewer last week said a clue to The Second Best Exotic Marigold Hotel’s credentials was in the film’s title.
This return to a wonderfully brash Indian alternative to the traditional cozy UK retirement home – peppered with lively, racy characters – is definitely runner-up to the earlier favourite.
However, what’s worse is that it comes close to earning the dubious moniker, carbon copy, thanks to its almost total lack of originality.

This is undoubtedly pitched fairly and squarely at our greying seniors – yes, I am one – but let me say on behalf of our generation that we don’t want to be stuck in front of the screen for the same show time after time.
My two-year-old granddaughter loves being plonked in front of the goggle box for an umpteenth outing of Mary Poppins or The Wizard of Oz, but I am still old enough, and young enough, to crave something new for my pound of sweated flesh.
For those who are perhaps a little more gaga, a reminder of where we left the characters still in the land of the living at the end of the last picture.
The golden oldies were living at Sonny’s (Dev Patel) Marigold Hotel for the Beautiful (aka Young at Heart) and Elderly, where they were still striving to be adventurous.
The most popular metaphor for ‘adventurous’ among the ageing is romance and even sex, so it should come as no surprise that our guests are pairing up to one degree or another.

Evelyn and Douglas (Judi Dench and Bill Nighy) have the romantic court covered – well Dame Judi at 80 is 15 years older than Billy Nighy – while Norman and Carol (Ronald Pickup and Diana Hardcastle) are jumping fences in the bedroom stakes.
That leaves man crazy Madge (Celia Imrie) as the token swinger, she’s got two suitors, and 80-year-old Maggie Smith as the aloof, but cool, dude Muriel.
When Marigold mark two opens the likeable Sonny is preparing for his own wedding to the beautiful Sunaina (Tina Desai), while at the same time working with part owner Muriel to raise enough money for a second hotel.
What saves Marigold Two from the tag carbon copy is the arrival of two almost younger guests – Guy (Richard Gere) and Lavinia (Tamsin Greig) – both vying for the only room left.
The catch is this formulaic film is that one of them is an all-important hotel inspector who holds the key to Sonny’s future fortune or otherwise.
Despite all the above it would be wrong to single out Marigold Mark Two as having no redeeming featuring – it is at times funny, warm and wonderfully acted by the best – but just because we Baby Boomers are greying doesn’t mean we can be taken for a commercial ride.
So let’s concede that the Second Best Exotic Marigold Hotel does have something to offer and extend a warm, but firm, farewell.
May the Marigold Hotel RIP.