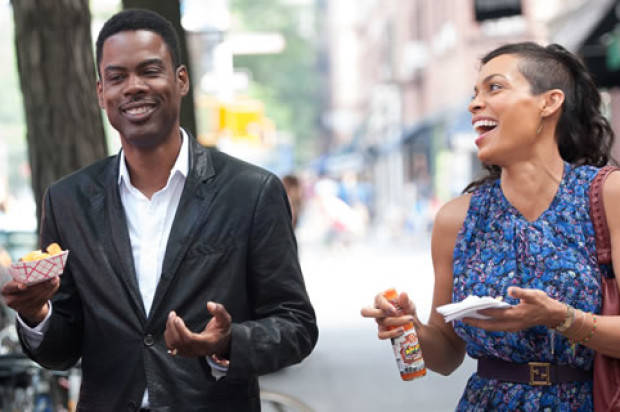 As a stand-up comedian Chris Rock is arguably one of the greatest of our era but in terms of his films and their quality, it’s a mixed bag at best. Even when Rock held the reigns as a director of his own projects they always came off second best to the material he created in his routines, so it’s something of a surprise that his latest effort ‘Top Five’ – which he serves as headliner, writer and director – is as intelligible as it is, essentially translating the vigour and observation he brings to his routines to the big screen.

Adopting a semi-autobiographical tone for the proceedings, Rock stars as comedian Andre Allen, a former stand-up turned actor who has a series of soul-sucking but highly profitable comedy films under his belt (a fictional police bear trilogy known as ‘Hammy’) and a much publicised history of alcoholism. Though Rock himself doesn’t appear as troubled in his own life as his on-screen persona, it’s clear he’s venting a little frustration at his own being pigeonholed into ludicrous comedies, and as is the case with a great deal of comedy actors trying to garner some credit by taking on more serious material, Rock’s cleverly commented on this with his alter-ego having starred, written and directed his own dramatic piece entitled ‘Uprize’, a big budget flop detailing the Haitian slave movement.

The initial set-up of Allen travelling throughout New York City detailing his career to New York Times reporter Chelsea Brown (a simply luminous Rosario Dawson) allows the film to incorporate episodic-like moments that manage to feel completely organic to the story; one of the highlights being that of Allen as the unwilling second-man in a crazed orgy organised by manic promoter Jazzy Dee (Cedric the Entertainer). Elsewhere, Rock’s vast array of celebrity friends are called upon for a series of amusing cameos with Taraji P. Henson, Gabourey Sibide, Adam Sandler, Whoopi Goldberg and, especially, Jerry Seinfeld emerging as the best; Seinfeld’s final line to a thieving stripper generating one of the film’s biggest laughs. As funny as ‘Top Five’ is though, and the title makes sense when you see the film if you’re wondering, what’s particularly impressive is when it veers into more serious territory, playing off Allen’s strained relationship with his father and his addiction to alcohol completely straight. There’s also the romance angle between Rock and Dawson that never once feels forced or predictable, and making Dawson’s character flawed in her own right bases the film in a sense of reality, as well as making the audience ponder if the two are actually right for each other.

Rock has indeed brought his A-game with ‘Top Five’, and I’m sure it will be a film that will take many by surprise, especially if you’re expecting a typical Chris Rock feature. A cross between a stand-up feature and a fly-on-the-wall glimpse into celebrity life, ‘Top Five’ is an effortless comedy that’s close to perfect in its execution; as Rock and Dawson debate “a movie is sometimes just a movie”, in this case it’s so much more.